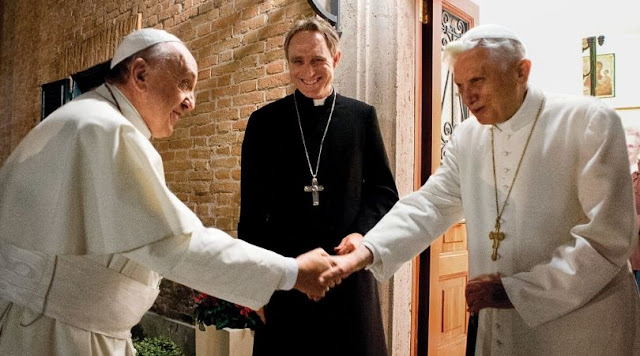 It seems like only yesterday that Gorgeous George Gänswein was the toast of Catholicism. Dashing, orthodox, courageous.

But where is he now?? He appears to have gone missing!

Even as recently as 2015 he appeared to be prepared to speak candidly about the faith challenging the Francis narrative - or idiocracy as it increasingly appears to be modelled after.

This morning German outlet, Die Tagespost reported that Pope Francis had placed +Gänswein on indefinite leave of absence as Prefect of Papal Household. The generally conservative publication reported that the intent was to give him more time with Pope Emeritus Benedict XVI. 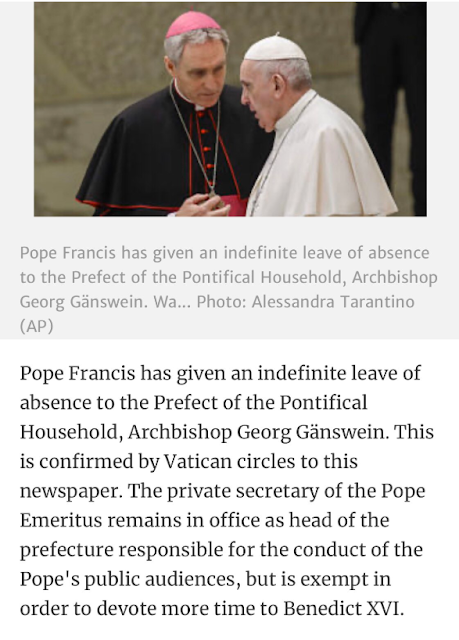 In a press release yesterday, the Vatican press office denied that Gänswein, who also serves as secretary for Benedict XVI, has been officially suspended as head of Francis’ papal household by Pope Francis. About four hours ago a Vatican spokesman told Edward Pentin that the report from Die Tagespost is unsubstantiated. The original report cited anonymous sources and provided no corroboration. This put the outlet in a position where it must now defend it’s reporting, but it is also indicative of the way the Vatican works under Pope Francis: no one knows what the hell is going on! No one is prepared to tell the truth, when something like this breaks, they scatter like cockroaches!

Vatican spokesman: +Gänswein has not been put on leave: "We have no information in that sense." His absence "during certain audiences in recent weeks" is "due to ordinary redistribution of the various commitments and duties" of Papal Household prefect and as personal sec to BXVI
— Edward Pentin (@EdwardPentin) February 5, 2020

The Vatican claimed that Gänswein’s absence from Francis’ private and public audiences for the past several weeks was “due to an ordinary redistribution of the various commitments and duties of the prefect of the Papal Household."

A careful decoding of this statement might lead one to conclude that Pope Benedict XVI's health has taken a turn for the worse and, as the principle "custodian" of the Pope Emeritus, Gänswein's priority is now taking care of him (see here for example). This position is further backed up by this piece in Italian Il Messaggero, a centrist secular daily which reports: While Gänswein can occasionally be seen accompanying Benedict XVI in the Vatican Gardens, he “can no longer been seen” in those places “where Pope Francis also moves about.” In other words, it looks as though Gänswein will now be all Benedict’s, all the time.

'Pope Francis had not accompanied Gänswein to the general audiences on Wednesday since January 15th - exactly since the day on which Fayard published the book "Des profondeur de nos coeurs" by Cardinal Robert Sarah and the retired Pope. "

There's some speculation that this is the now usual Vatican cover-up for something about which there is no official line: in other words, Pope Francis making another mess.

Vaticanista Marco Tosatti seems to corroborate this in his blog on the subject. He claims his own sources within the Vatican suggest that Gänswein has been absent from the side of the pontiff, ever since the Pope Emeritus committed the cardinal sin of co-authoring a book explaining the important reasons behind continuing a practice which has been part of the priesthood for hundreds and hundreds of years.

When that storm (how on earth could it have been a storm when it was merely stating what the Church has always taught???) broke, there was a rumour that Francis went crazy. Outbursts of anger have been frequently reported, and even publicly displayed on occasion! And it was reported that Gänswein asked that Benedict XVI's name be deleted from the introduction & conclusion of the book on the priesthood and celibacy. He said Benedict knew his text would go into the work but wasn't aware of the book's precise form and presentation.

All this might be what prompted Archbishop Carlo Maria Viganò to accuse Gänswein of “abusively and systematically” exercising control “towards the Supreme Pontiff Benedict XVI, ever since the beginning of his pontificate.”

Tosatti says this did not happen. Apparently Pope Francis simply said to the archbishop: "I don't want to see you anymore." The prefect asked him: "But am I returning, and when?" The Pontiff gave no reply to this question. Gänswein then asked him, "But can I still come into the office?" the Pontiff replied, "It's better that you don't, since Msgr. Sapienza is there." And this is how Georg Gänswein disappeared ...