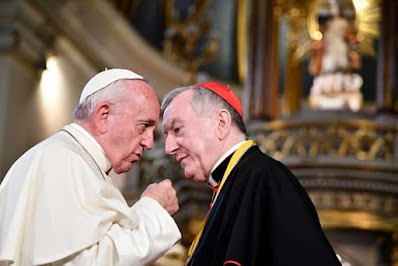 As the Pope promulgates another long, rambling, confusing document in which he quotes himself as the most important authority on everything again and again and again, one can only gaze with a sort of stunned incredulity of the chutzpah of a man who, less than one week after sacking the head of his own financial institutions for corruption, issues a missive to world governments on how they should be doing things.

As I spend my day, working with colleagues, travelling, looking after my children, I see that I am surrounded by so many souls who do not know Jesus as well as they should: as well as they could. I deeply desire to share the joy that my faith gives me. The important knowledge about truth, beauty, honour, loyalty and integrity that have a transformative effect on one's life and relationships. The moving and comforting knowledge that Jesus died to save us from the slavery of our sin and that we do not have to simply exist: we can be more, we were created to be more!

I feel desperately inadequate to the task of evangelisation that I am presented with every day, but I consider it a duty to constantly strive to improve my knowledge and the way I communicate my faith to others in order to help them to see the truth of the Christian way. I strongly believe that, if I struggle with a concept, a particular doctrine, I need to study it ever more deeply in order to distil that knowledge down into the simplest, most easily articulated sound bites.

Papal encyclicals have long been something I have looked forward to and devoured. I remember years ago, a non-Catholic friend enquired about what Laborem exercens was about as I was reading it on holiday. After reading it, he converted.

I have to wonder, could Fratelli Tutti elicit the same reaction from anyone? Considering its content, length and written style, I would have to say it would be a long shot!

There have been heaps and heaps of criticism, but, naturally, also a number of good people who have taken a more pragmatic approach to the document and sought to portray it in a positive light by looking at the teaching we can draw from it which makes sense to Catholics and show how it is of some value.

What always worries me about this approach is something I sometimes refer to as "celebrating mediocrity". If we ignore obvious problems and focus solely on what is good, no matter how little "good" there actually may be in order to protect the source (i.e. the pope), we quickly lose credibility.

Wherein Gerald Murray incorrectly claims that #FratelliTutti is “a little short in Christian perspective;” to be clear, the encyclical is entirely and wholly Christian, but inter-religious as well, thus confirming Pope Francis, once again, as the moral leader of the world. https://t.co/rVmM1N2B69

I’m disappointed that so many otherwise-intelligent people can take seriously a document that, if not written by a famous religious leader, wouldn’t even get a C+ in a community college poli-sci class.

What seems clear is that, whatever else you take from it, the document is sparse in its proclamation of the Gospel message which is the message the pope is commissioned to teach to the world. It appears to clearly place human brotherhood as a truth more essential and more important than our Catholic faith: we are human brothers first, Catholics, Muslims, Hindus second (and not necessarily in that order). Basically, the Pope hopes that religious differences won’t get in the way of human brotherhood.

This is profoundly familiar to me, because it is the mantra of mediocrity I grew up with and was taught by Catholic schools and institutions. And it is error. It took me further years to discover the value of truth that overturns this "we're all climbing up the same hill" narrative.

Irrespective of how I read this document, which seems to single out the USA just before an election, it troubles me. To see Freemasonry openly praising it because it aligns with their principles, troubles me.

Also quoting verbatim the Moto of the French Revolution is, at best, incongruous, at worst, deeply troubling and problematic. 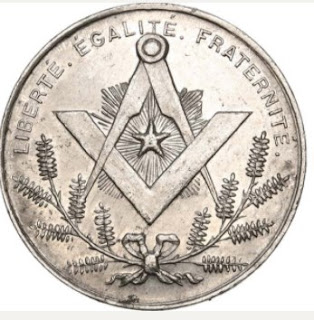 And when we look to what the pope is doing and what he is working towards, our disquiet can only be deepened.
The sacking of Cardinal Beccui might have been an attempt to offer a sacrificial offering that Pope Francis thought would save him further exposure, after all, he has proven fairly impervious to main-stream media criticism up to this point in his pontificate. Interestingly, Cardinal Pietro Parolin has, so far, remained largely aloof from the financial storm surrounding while the ongoing investigation has claimed the jobs of at least six former senior officials, and seen a dramatic fall from grace for his former chief deputy, Cardinal Angelo Becciu. This despite the fact that this concerns the curial department he leads.
A recent announcement, however, revealed that Cardinal Pietro Parolin will no longer sit on the reconstituted oversight board of the Institute for Works of Religious (IOR), commonly called the Vatican bank – the first time that the Secretary of State will not have a seat. That announcement is one of several indications that the cardinal and his department, both at the center of Church governance for years, may be losing influence and trust with Pope Francis - see this full report from CNA.
Parolin's fall from grace might be something you consider to be all well and good. He hardly seems to be on the side of the Angels, especially with Cardinal Zen consistently and loudly calling him out publicly as a liar. 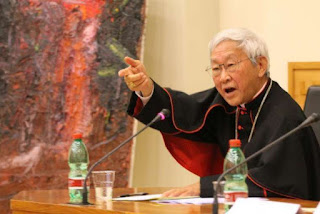 What a great opportunity for Pope Francis to get someone good in to clean out the stables eh? Except that, on October 5th, Pope Francis chose Cardinal Kevin Farrell, the cardinal camerlengo, to oversee the Commission for Reserved Matters, which monitors financial transactions falling outside the normal Vatican regulations.
Literally I thought "What??"
Farrell was promoted to camerlengo at the same time that his mentor Theodore McCarrick was defrocked.
Farrell, the head of the Vatican’s office of Laity, Life and Family, was consecrated as a bishop by McCarrick in 2001 after McCarrick was installed as Archbishop of Washington.

Farrell was a close collaborator with McCarrick during his time as the Cardinal Archbishop of Washington, DC, having served as McCarrick’s archdiocesan chancellor and living in the same house with McCarrick for six years. He has also said that he knew nothing about the misconduct of the late Father Marcial Maciel, although he also worked closely with Maciel in his days as an official of the Legionaries of Christ. To appoint Farrell to a job that will require shrewd scrutiny of complicated cases doesn't appear particularly astute. That the pope felt obliged to choose him for the role makes Parolin’s omission from the committee appear all the more pointed.

I wonder if we will ever dare ask why.did Francis appoint even more rogues than those who were there before he became Pope?

Why did he promote the more criminal of them?

Why did he get rid of those who had a spark of sanctity?

Of course, those paying attention to the openly questionable nature of many of the appointments made by Pope Francis were asking questions back in 2015.

Are we really surprised at the fruit this pontificate is bearing?