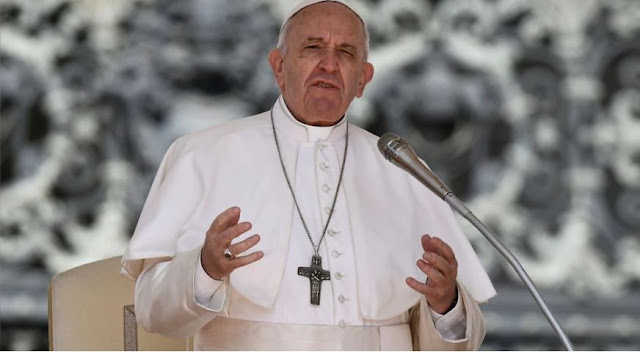 Yesterday I read this post from Dan Hitchens, deputy editor of the Catholic Herald, in First Things. It most starkly cites Cardinal Robert Sarah:


"The Vatican’s liturgy chief, Cardinal Robert Sarah, recently observed: “Every day I receive calls for help from everywhere from those who no longer know what they are to believe. Every day in Rome, I receive discouraged and suffering priests. The Church is going through the dark night.""

Hitchens eloquently articulates the prevailing attitude to the papacy:

Like the majority of Francis’s critics, Sammons was reluctant to make his concerns public. The pope is not just a superior to whom we owe submission, but a father to whom we owe our love. Yet the Church permits criticism of popes in some circumstances—especially when the truths of the Faith are at stake.

We are regularly assured that what Francis really said or meant, when you look at his statements from the right angle and put them into the proper context, was plainly orthodox. He has supposedly been misrepresented by hostile or uncomprehending journalists. But those who offer such explanations eventually run into difficulties. The diligent and thoughtful apologist Jimmy Akin has become a byword for this approach. But last month, he acknowledged in passing that the pope has made “any number of poorly phrased statements that need proper clarification.” In other words, it’s not just the media’s fault. Another layman, Tom Hoopes, went so far as to write a book called What Pope Francis Really Said. It was a chastening experience. “I spent a year reading Pope Francis,” Hoopes has recalled, “and it was the hardest year of my life.”

I started as an apologist for Pope Francis as well. Pointing out instances that could be evidence of his orthodoxy when he was being hailed as a liberal reformer, showcasing positives, trying to put concerns to rest. But the pressure and evidence are unrelenting. At this stage he is doing real harm, this cannot be denied even if it can be positively spun.

Hitchens' article begins with some examples of deeply problematic issues which the Pope has dealt with simply by saying he doesn't remember what he said or did.

All this leads Hitchens to the sad conclusion that Pope Francis is:

"a teacher who often speaks without much reflection, before or after. While that may not be the greatest of imperfections, in a pope it can be catastrophic."

I would suggest that even that is rather a generous assessment. When one considers the Pope's call to youth to "Make a mess", in the context of a papacy littered with confusion, verbosity and often outrageous remarks, it is really difficult to see how he can be considered to be confirming the faithful or clarifying the deposit of faith - the job of the pope.

Given the disheartened state of both the clergy and the laity, rampant heretical activity within the Church which suffers scandal after scandal, what can we say of priests and bishops who still promote and support the pope?

The faith will continue, just as it has through times of much worse persecution. Now as then, it will be carried forward not by the progressive Jesuits, not by the nuns who want abortion, or the priests celebrating & encouraging sin, but by the families, the "dirty feet" of the Church, who hold and believe the Catholic faith and pass it on faithfully to their children because it is life-affirming, positive, powerful.

I recall reading Father Gabriel Amorth's books on his life as an exorcist. One of the ways of recognising demonic activity is that the possessed doesn't remember what they did or said when under the influence of the demon. Put in the context of the pope's memory black-outs, this gives me even greater cause for prayer and concern. Lord deliver us I pray!