Messori on Church Unrest: Many Are Concerned But Christ Won’t Leave His Church 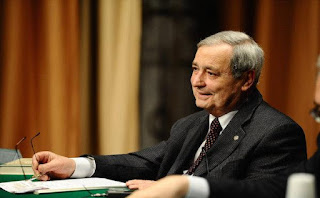 In this recent post, I remarked at how scandalous it is that the Church agenda, specifically the appalling Amazonian instrumentum laboris, are so diametrically opposed to the Catholic faith, that leading cardinals feel compelled to speak out against it publicly.

To create an atmosphere where princes of the Church are this uneasy with what is being taught and promoted seems to place Pope Francis well outside any considered via media, and on a definite path in a single direction - away from the settled teaching of Christ and towards some kind of "world religion". Certainly Papal sycophants consider Pope Francis is on some great mission to change the Church:

Galleys (otherwise known as "uncorrected proofs") of #WoundedShepherd are here from the publishers @HenryHolt. This early version is being sent to reviewers, endorsers etc. Book goes on sale November 5, when I am in U.S. for a fortnight of talks & lectures. Details to follow. pic.twitter.com/kaHedhhIBX
— Austen Ivereigh (@austeni) July 12, 2019

The question on any sane Catholic's lips seeing Austen's book must be "what is Pope Francis struggling to convert the Catholic Church to?"

Well, we have lots of clues. For example, he has sacked everyone at the Pontifical Academy for Life and installed staff with views at odds with settled Catholic teaching on key areas:

The direction is not subtle either, it is public and openly signalled to all:

Archbishop Paglia has turned his episcopacy into one big Grindr advert

The disgraceful Paglia has even attacked the family! Indeed, there is a growing and well documented list of issues with this Papacy which is virtually beyond comprehension to me given how close I felt to the papacy before Pope Francis and how I saw it a a guarantee of orthodoxy and stability in a world in a state of wild flux. Pope Francis is trying to catch up with all that wild flux and ride on the crest of the wave of chaos...And even that is not enough for ze Germanz.

I began my recent post on the outspoken cardinals by stating "Two Cardinals go public over Amazonian Synod problems, how many have the same misgivings but choose to keep them to themselves?"

Today, the highly respected Vatican Reporter Edward Pentin, posts a blog in the National Catholic Register, which goes some way to answering that question.

In it, the well-known Catholic Italian writer Vittorio Messori has said he and “many Catholics are concerned, some are even desperate” about the current state of the Church, but that he is not without hope because Christ never leaves his Church alone.

Messori, who wrote The Ratzinger Report with Cardinal Joseph Ratzinger and Crossing the Threshold of Hope with Pope St. John Paul II, told the Italian Catholic daily La Fede Quotidiana Sept. 17 that confusion is “present and it is saddening, confounding.”

He said a kind of “conformism” about Pope Francis exists, which is “palpable” in the Church.

“It’s disconcerting that only two or three almost 90-year-old cardinals speak and protest,” he observed, adding that he knows of “many bishops and also cardinals whom I have dialogued with in private who are pulling their hair out in disagreement.”

“But they are afraid, silent, shutting up,” he said.

Messori noted that for two millennia criticism of the pope had been discouraged but today this tendency is “accentuated.”

“It’s said this is the Church of mercy, but it’s nonsense,” he said. “Those in command are intolerant of every critical voice.”

The Italian writer recalled writing a “polite article” in the Italian daily Corriere della Sera in which he “asked questions” and made “reflections” but was “overwhelmed with abuse, especially from certain Catholic media.” He added that a kind of committee was set up asking Corriere della Sera to remove him as a contributor.

“So with what consistency can it be stated that this is the Church of mercy, of open and fair dialogue, of parrhesia?” he asked, referring to Pope Francis’ frequent call for both mercy and open, frank discussion.

But he noted that the Church is not a business, multinational or simply a government. “In short, it cannot fail,” Messori observed.

As I said recently here, the astounding thing for me is the contrast with Pope Benedict XVI's attitude to his papal authority: “My authority ends at that door.” Pope Francis, by contrast, rules with a terrifying rod of iron, so that prelates are afraid of their lives even!

+Vigano has gone into hiding and fears for his life following the publication of his testimony https://t.co/Q47T5fGp1N @NCRegister @EWTNNewsNightly @EWTNVatican
— Edward Pentin (@EdwardPentin) August 28, 2018