Liberal can never be liberal enough... 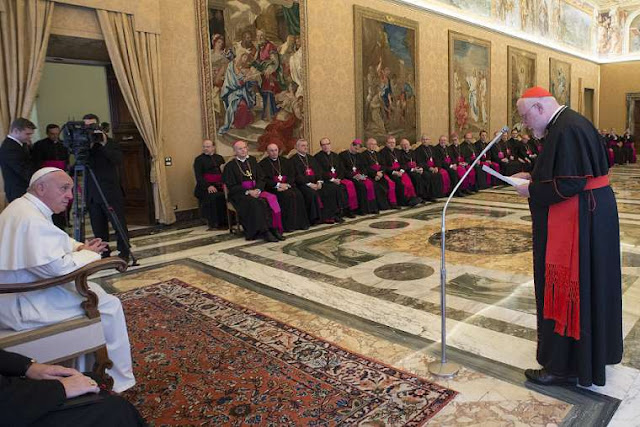 Completely unsurprisingly, news broke this morning that the German Church appears to have broken with Rome:

"German bishops revolt against Rome" — The diocese of Regensburg published on Saturday an alternative draft statute to the synodal way, one that reportedly corresponded to the #Pope's wishes, but it was rejected by the German bishops' conference permanent council by 21 to 3 votes https://t.co/aC0U2hmSbx
— Edward Pentin (@EdwardPentin) September 14, 2019

What's happened is this:

On Sept. 4, Cardinal Marc Ouellet, Prefect of the Congregation for Bishops, wrote to Cardinal Marx as head of the German bishops’ conference, expressing concerns at the German plans to form a Synodal Assembly as part of the “binding process” announced by Marx earlier this year.

The letter was accompanied by a four-page legal assessment of the German plans by the Pontifical Commission for Legislative Texts, which expressed reservations about the German plans, especially the intention to consider and pass binding resolutions on matters of universal Church teaching and discipline. The legal assessment explained that both proposed content areas and the method proposed for addressing them exceed the German bishops’ authority.

On Sept. 13, the German bishops’ conference published both Ouellet’s letter and the accompanying legal assessment, but rejected the concerns expressed in them, saying the Vatican’s critique was not based on the current version of German plans. But a review of conference documents indicates that issues flagged by the Vatican remained unaddressed by the German bishops’ draft statutes, provisionally approved Aug. 19, and still unchanged Aug. 30, 5 days before the Vatican’s intervention.

So are the German bishops just flat out lying about this? If they are, shouldn't something be done about that - or is lying OK now?

It fits with a narrative I have long held to, which is when you court a progressive agenda and reject objective truth, you are signing your own ideological death certificate. You can never be progressive enough for progressives. Progressivism inevitably eats itself. Pope Francis has been at this game from day one, and despite the obvious problems in the German Church (close to zero vocations, an exodus of believers, an uber liberal agenda embracing all manner of modernist ideas) the German Church has shown it has a great deal of influence with Pope Francis perhaps most obviously manifest in the quite extraordinary amount of credit given to Cardinal Kasper by Pope Francis.


Since at least the 1970s, principally in the German-speaking world, there has been a sustained effort to modify the Church’s pastoral practice to allow such couples to receive absolution and Communion without a required intention to change their situation. Most prominently associated with Cardinal Walter Kasper, the proposal was authoritatively rejected as incompatible with Catholic doctrine by St. John Paul II and Pope Benedict XVI, and thus expressed in the Catechism of the Catholic Church.

Fr de Souza shows how ++Kasper has been given prominence by Pope Francis from the very beginning:

Pope Francis held up Cardinal Kasper as a model theologian at his very first Angelus address on March 17, 2013, four days after his election. In February 2014, he invited Cardinal Kasper to address the College of Cardinals, wherein Cardinal Kasper argued for a change in the Church’s practice. When the cardinals emphatically rejected Cardinal Kasper’s proposal as contrary to the Catholic faith, the Holy Father himself came to the embattled cardinal’s defense, indicating that the subject would be on the agenda for two synods on the family in October 2014 and October 2015. In August 2015, Pope Francis indicated in an elliptical way that he did not hold to the clear teaching of St. John Paul II in Familiaris Consortio (1981) and Reconciliatio et Paenitencia (1984), along with Pope Benedict’s Sacramentum Caritatis (2007). He quoted the relevant texts, but deliberately omitted their conclusive teaching on the points in question.

Today the Pope of double-speak and confusion gives us this:

“To be modern, some believe that it is necessary to break away from the roots. And this is their ruin, because the roots, the tradition, are the guarantee of the future,” #PopeFrancis said Sept. 12. https://t.co/aicRNPn6aU via @courtneyagrogan @cnalive #Vatican #Catholic

Just a few days ago, the Pope was attacking faithful American Catholics for their adherence to Tradition and suggesting they were fulminating in favour of schism. Now it seems the very model of Church he stands for has stepped away from him.

Back in September last year I suggested that the German elite had turned against this papacy after Der Spiegel the prominent, well read and progressive German magazine published a 19-page report criticising Pope Francis’s leadership of the Catholic Church and accusing him of ignoring abuse survivors in Argentina. Der Spiegel had consistently supported Pope Francis yet in the space of five years its' narrative changed from the headline: “God’s Best Man” to “Thou shalt not Lie” (see here).

These developments look very much like the fruition of that split.