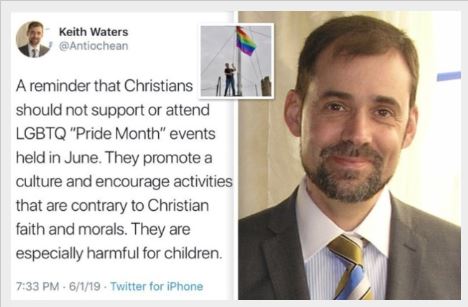 This is my friend Keith. Keith has been a "Twitter friend" for years now. He's far from radical or inciteful, I've always thought of him as a nice, regular Christian guy. He upholds Christian principles like the right to life and we often exchange tweets about pro-life issues. He's on-side, one of the good guys - thoroughly uncontroversial it has always seemed to me.

Back in June he tweeted the above, like many of us, concerned about the mainstreaming of morally problematic activity and the indoctrination of children by this sexual agenda.

Keith had copied a tweet from Bishop Thomas Tobin of Providence, Rhode Island, (not "nighty-nighty baby", the other one) reminding Christians not to "support or attend LGBTQ 'Pride Month' events held in June." He may even have picked up my own re-tweet and copied it (as an Evangelical Christian, probably best not to re-tweet Catholic hierarchy I suppose was his thinking).

Anyway, as Church Militant reports: using Tobin’s words, Waters explained that the pride displays “promote a culture and encourage activities that are contrary to Christian faith and morals” and “are especially harmful for children.”

“When I decided to put the reminder out for Christians, I logged on to Twitter and the first tweet I saw was from a Catholic bishop saying exactly what I felt needed putting out to all Christians," Waters told Church Militant. "It seemed to me that it was one of those God-given moments."

“Bishop Tobin had put the message so succinctly, eloquently, relevantly, boldly and lovingly, that all that was required was for me to engage in a little ‘holy plagiarism!’” he said, adding, “I merely changed ‘Catholic’ to ‘Christian’ and applied what Bishop Tobin had said to all Christians.”

The backlash was savage and swift. LGBT activists from Ely went ballistic and stirred up local residents in an attempt to drive the pastor and his family out of the cathedral town.

Gay activists told a local undertaker that Waters was dead and asked for his funeral to be arranged. Waters wife, Joanna, was shocked when the funeral director and his assistant visited her asking how she wanted to dispose of his body.

On June 2, a day after the tweet, John Elworthy, gay activist and editor of Cambs Times, Wisbech Standard and Ely Standard, attacked both Waters and Tobin:

Your theological denouncement Keith wasn’t even one you’d thought through yourself having noticed you’d ‘borrowed’ it from @ThomasJTobin1 who hardly inspires biblical certainty. Sorry Keith you are helplessly and hopelessly wrong https://t.co/qcp55pkJT8
— john elworthy (@johnelworthy) June 2, 2019

Elworthy also tried to get Waters’ church expelled from Cambridgeshire City Council hall, publicly asking: “Am I correct in stating Keith you hire your church building on a Sunday from @CambsCC? Your doctrine would appear to contradict every single assertion of @CambsCC in support of LGBT.”

After failing to bully Waters into apologising for his beliefs, the pastor was pilloried on the front page of the Cambridge Evening News, which contrasted his disapproval of the pride parades to the Church of England Ely Cathedral’s willingness to fly a gay pride flag with the support of Stephen Conway, Anglican bishop of Ely - so the useless Anglican "bishops" are actually facilitating the persecution of Christians in the UK for upholding Church teaching. Yay!! Way to go you idiots!!

Liberal Democrat politician and City of Ely Councillor Alison Whelan joined the Twitter mob calling on police to investigate Waters’ tweet as a “hate incident.” East Cambridgeshire promptly tweeted back informing where the incident could be reported.

This is not acceptable behaviour. @EastCambsCops This is a hate incident. Please get in touch immediately as I wish this investigated.
Ely has always been a hugely welcoming and inclusive community. We will not allow people like this to destroy that. @PrideEly https://t.co/6USOxadPmz
— Alison Whelan 🎶 (@alisoncwhelan) June 2, 2019

LGBT activists continued to perpetrate hoaxes against Waters, placing an advertisement in his name to sell his house and his car.

The pastor was horrified when a property firm offered to buy his house at a knockdown rate, saying they were responding to an advertisement, claiming he had to leave the area in a hurry. But #LoveisLove, right?

A parent from the Isle of Ely Primary School, where he worked, stopped her car in front of his bicycle and “ranted” at him. False rumours were spread that Waters was a child molester.

After more harassment at home and on the streets, Waters deleted the tweet, fearing for the safety of his family and his church.

Meanwhile, Helen Davies, headteacher of the Isle of Ely Primary School, which employed the bi-vocational pastor as a caretaker, capitulated to threats from LGBT activists and parents and issued Waters a final warning for bringing the school into disrepute and "breaking" the code of conduct.

Of course there was absolutely no support from the established Church of England and other mainline denominations which is completely typical of the lack of any Christian leadership in Britain, Waters describes how institutions like Ely Cathedral, which supported the “gay pride” parade, hold sway across town and had the power to silence dissenters. This is familiar to everyone in the UK. The LGBT juggernaut seems utterly unstoppable, and far from standing up for Christians principles, our bishops & Catholic Schools are complicit (don't act shocked, I told you that this was happening in May 2017!!).

The intolerance and hatred directed at Keith are indicative of the new progressive liberalism so many are eagerly signing up to in the Church. As I have stated numerous times, how do pastors reconcile the obvious immorality on display at Pride, and brought to public attention by Pastor Keith with Christian principles taught for 2,000 years?

If you claim to be Christian, but decide that modern secular society is right & Church teaching for 2,000 years is wrong, what does that say about your faith in the Church, Revelation, Christian morality and your own intellectual ability to reason morally? (Here's a hint - it says they're not up to much!).

When priests support this agenda, they are facilitating the people who perpetrated this terrible ordeal on Keith. What was Keith doing? Trying to PROTECT children and be true to Jesus. Who's side are you on?

Just look at the "causes" drop down menu on the Brentwood "Caritas" website - it looks like a directory of sexual deviancy rather than a list of Catholic causes to support, it's a joke that reflects rather badly on the designer of the website and the diocese who support it!

Our children need to hear a counter balanced, intelligent narrative to the constant slick of confusing LGBT/ trans gender agenda which is poured out daily through mainstream media. I'm not talking about prejudice or bigotry, I'm talking about an individual's right to assert a moral precept and try to hold to that precept.

If you can support Keith in any way then please do so, even if you just tweet him a message of support. And please, start standing up to this before it destroys our society completely!