McCarrick Report: Who do they think they are kidding? 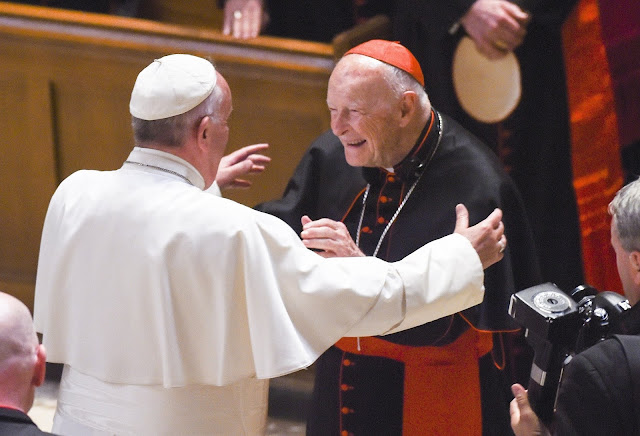 The world has been waiting for two years for the answers as to how a Catholic Cardinal was able to use his position & privilege to travel the world, meet international leaders and abuse children and young men, in plain sight of his colleagues. The answer came in a 449 page document issued by the Vatican issued 10th November 2020. You can read the whole thing here.

I'm going to give you an abridged version, but first of all I think it's really important to remember a few things.

Firstly, let's hear from the man himself. In this speech given at Villanova University in 2013, the then-Cardinal McCarrick openly boasted of his vital influence in the election of Cardinal Jorge Bergoglio as Pope. The fact that McCarrick's support and influence was in Bergoglio's election is a fact which has been confirmed by others:

Despite this, you may recall that Pope Francis denied knowing anything about McCarrick back in May 2018 in an interview.

In August that year, on a plane and after Archbishop Carlo Maria Viganò had revealed that he had warned the Pope directly about McCarrick in 2013, Pope Francis said he would "not say one word" about the issue.

You might also recall American Monsignor Anthony Figueiredo, a priest of Newark, N.J., who was ordained by McCarrick in 1994, served as his personal secretary from September 1994 to June 1995, and later acted as a go-between and personal aide during McCarrick’s multiple visits to Rome over a 19-year period has published correspondence which confirmed that restrictions on McCarrick were imposed by the Vatican in 2008 as previously revealed by Archbishop Vigano. In the released correspondence, McCarrick also claims that Cardinal Donald Wuerl, then the Archbishop of Washington, was aware of them and involved in conversations about their implementation.

McCarrick actually asserted in that correspondence that the Vatican wanted to “avoid publicity” and thus kept the restrictions confidential. The correspondence further confirms that McCarrick gradually resumed travelling and playing prominent diplomatic roles under Pope Benedict XVI (as I reported here - this was reported as a positive thing by the National Catholic Reporter and the restrictions were off when Pope Francis was elected). McCarrick was also involved in talks with China that may have helped shape tragic 2018 deal between Rome and Beijing over the appointment of bishops.

McCarrick’s activities were not carried on in secret, as he regularly wrote to Pope Francis between 2013 and 2017 to brief him on his trips and activities. Unbelievably, the Pope denied this categorically in an interview with Mexican journalist Valentina Alazraki.
We know from the evidence of this pontificate that the Pope rewards his friends, those that are prepared to do his bidding and destroys his enemies, those who wonder at his strange, uncatholic approach, or even, dare question it. Given this fact, and that McCarrick lived with Kevin Farrell for six years and was his mentor, how can it not be obvious that Pope Francis & McCarrick are friends, just like all the other perverts that the Pope has surrounded himself with: Msgr. Ricca, or Archbishop Zanchetta, or Archbishop Pena Parra, or Bishop Barros, or Bishop Pineda, or Cardinal Danneels, or Fr. Inzoli or Archbishop Paglia or Cardinal Coccopalmerio or Fr. Rosica or Fr Martin (I could go on for most of the day adding names and links to that list, but I won't!).
So what's in the report?
Well Viganò is in it. He's in it A LOT! He's mentioned 300 times. The report is very careful to tell us who McCarrick wasn't pushing for episcopal promotion, but if the Vatican were serious about accountability and transparency, it would also disclose who he did push. Because those priests, who he knew would cover for him, should be removed from all office ASAP. Therefore it is more important to note what's not in the report: No mention of Weurl, Tobin, Cupich, Farrell. 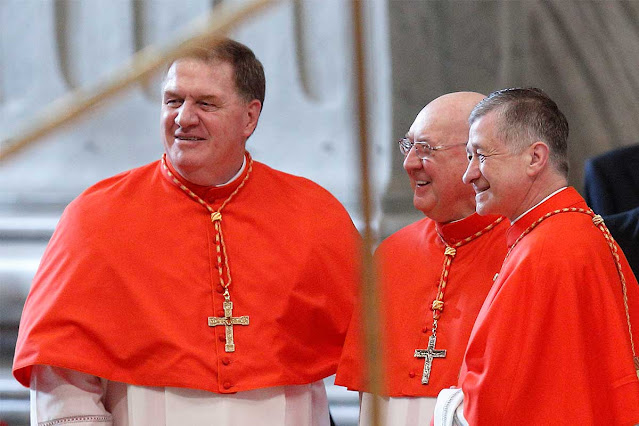 So the story here is that it's not their fault. It's JP II's fault, or Pope Benedict XVI, or something. Definitely nothing to do with Pope Francis. This is Francis and his administration washing their hands of any responsibility. Not the sort of leadership we want or need.
And interesting to note that the Pope was criticised for not cooperating with the IICSA enquiry released on the same day (watch the video here).

As Christopher Altieri writes in the Catholic Herald:
"Praising the courageous transparency of a highly curated much-belated document that offers a window onto very bad decisions in the past simply will not do. It is a bridge too far, especially when there is ample evidence to suggest the ideas & casts-of-mind that animated those baleful decisions live very much in the present at the highest echelons of Ecclesiastical power."

As a friend said to me yesterday: "You need to remember that these people are and were spectacularly uninterested in what you and I might call the salvation of souls. Having worked with and alongside these people for a very long time, I actually don't believe that we have the same religion and often doubt that there is real supernatural faith there beyond a cultural religiosity in most of them. They are company men whose companies sell pastoral accompaniment not priests preaching the universal call to holiness."

If you want a more text based analysis of what the report contains, Steve Skojec literally blows 10 foot wide holes in it in short order here.
The report is designed to push away blame and responsibility from those who are responsible and to blame in order that they can continue their pastoral project and enjoy the temporal delights their privileged positions have afforded them. They have nothing, nothing to do with the mission of Christ's Church. They betray it and its mission on a daily basis.

If you use tools, welding or gardening equipment or know someone who does, please check out my website: