Love of Money - The Root of All Evil 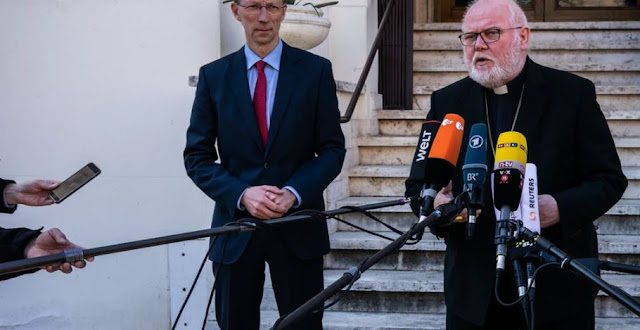 How do you know that the Pope's spin doctors are mendacious and self-interested?

Well, a really good clue is if something really big is going on which contradicts their consistent narrative and they completely ignore it.

The German bishops are doing this right now, ignoring the pope, ignoring the Vatican, ignoring the curia and setting up their own "binding synodal process" which will lock in fundamental changes Catholic teaching, including:
Issues they are justifying by linking them to the sex abuse crisis.

The Vatican has written to the Germans stating that this new synodal assembly is not ecclesiologically valid. However German bishops appear determined to push through a new morality, despite it constituting a de facto break with Catholic authority and doctrine.

We can see how this has progressed: the intercommunion debate forwarded by ze Germanz was initially kicked into touch by Pope Francis, ze Germanz ignored him and he eventually green lighted the plans: thus the Vatican has not stopped any of this in the past. Ze Germanz are usurping papal control and the unity of the Catholic Church, perhaps because they're concerned that a later, more orthodox pope would not allow the German direction.

Remember this? And this?

As I said recently, ze Germanz have been losing patience with Pope Francis, he's a rule breaker, but he can't go far enough, fast enough for them!

How do ze Germanz get away with this?

At the point where Pope Francis has ordered Vatican officials to close a widening budget deficit at the Holy See and stop poorly managed spending and investments from undermining the operations of the Catholic Church’s global headquarters, we see ze Germanz usurping the authority of the Pope and the universal Church and directly contradicting papal directives. Who is the head of the Vatican's budget oversight council? Cardinal Marx of course!

This week, following Cardinal Marx, (also president of the German bishops’ conference), holding talks about this German “binding synodal process,” with Pope Francis and Cardinal Marc Ouellet, prefect of the Congregation for Bishops, German bishops are set to vote upon statutes to make this a reality.

One German Cardinal has insisted that the German Church must obey Pope Francis and remain in unity with the whole Church (you couldn't get a much clearer warning about schism than that!) and yet the Vatican seem reluctant to censure ze wayward Germanz and Papal Tailgaters like Austen Ivereigh, Massimo Faggioli, Antonia Spadaro, the infamous "Pope News" are completely silent about all this.

All the signals are that Pope Francis is not playing ball:

“Cardinal Marx wished to return with an unambiguous sign of support from the pope, preferably in a letter or statement,” one senior Churchman told CNA. “He did not." https://t.co/GEGvMvvLPd via @cnalive
— Ed. Condon (@canonlawyered) September 23, 2019

And the German "synodal path" appears so toxic that at least one theologian involved has resigned because it is "fixated on women's ordination" a matter which has been closed by Pope Francis (see Evangelii gaudium no. 104:


The reservation of the priesthood to males, as a sign of Christ the spouse who gives himself in the Eucharist, is not a question open to discussion

In June, Pope Francis wrote a letter to German Catholics offering a corrective to their bishops’ plans. He warned against a “new Pelagianism” and the temptation to “adapt” the Church “to the spirit of the age.” (It seems to me that's what Pope Francis IS doing, albeit at a slower pace than ze Germanz, but as I said, once you start down that path, it only leads to one place: APOSTASY).

Most specifically, the pope warned the German bishops against striking out on their own. Communion with the whole Church, he said, and respect for the hierarchy, are vital to any authentic understanding of synodality.

“Every time an ecclesial community tried to resolve its problems alone, trusting and focusing exclusively on its forces or its methods, its intelligence, its will or prestige, it ended up increasing and perpetuating the evils it tried to solve,” he told the Germans.


“In Germany, the Pope's letter was much praised, but then put aside and [the process] continued as previously planned.”

The thing is, it really seems to me that the Pope and the Vatican generally are willing to ignore all this because they are compromised financially - they need ze Germanz cash. If this is true - God help them!


“No one can serve two masters. Either you will hate the one and love the other, or you will be devoted to the one and despise the other. You cannot serve both God and money.

You will find nothing about this extraordinary and worrying turn of events on Austen Ivereigh's Twitter feed. Instead, he is pushing a completely false narrative about an American schism which does not exist:

It is time says @Where_Peter_is for Cardinal Burke to make a profession of faith to the pope, recognizing him as the valid successor to St Peter. For the evidence is overwhelming that he is in formal schism. https://t.co/wZLv6x7UDd
— Austen Ivereigh (@austeni) September 25, 2019

Burke & Schneider are now trying a new tactic: they as honest critics making theological arguments. But they are not academics engaged in dialogue; they hand down fatwahs (heresy! ambiguity!) on transparently twisted misreadings of papal teaching. https://t.co/ZtWRToBSe3
— Austen Ivereigh (@austeni) September 24, 2019

This is clearly deeply mendacious and extremely sad; it demonstrates unequivocally that there is no justice, no integrity in the position being pushed by people like Austen.

It is interesting that this narrative suits the one he is pushing in his new book.

Galleys (otherwise known as "uncorrected proofs") of #WoundedShepherd are here from the publishers @HenryHolt. This early version is being sent to reviewers, endorsers etc. Book goes on sale November 5, when I am in U.S. for a fortnight of talks & lectures. Details to follow. pic.twitter.com/kaHedhhIBX
— Austen Ivereigh (@austeni) July 12, 2019

In this interview, Ed Pentin suggests this narrative is complete lies coming out from people who directly surround the pope. If there is a plot, it is the plot to call people names. The plot is madness, so many people are simply concerned about the direction of this pontificate.

The whole thing is laid out very well here: