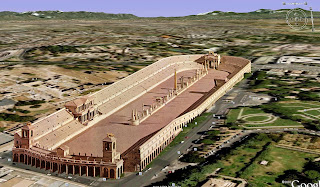 On Tuesday, a strange thing happened at the Vatican. There was a presser, where a book was launched written by Cardinal Francesco Coccopalmerio, president of the Pontifical Council for Legislative Texts, on Amoris Laetitia. The Cardinal, however, was nowhere to be seen himself, claiming he "had a meeting at the Congregation for the Causes of Saints"

The Pope sends a lackey to answer the dubia and he doesn't even turn up? Is it me or does this just look increasingly like a circus? Also the chap in the middle of the picture below is Orazio La Rocca, Vaticanista of La Repubblica,  which you may recall is the Pope's favourite newspaper of Eugenio Scalfari fame! It would seem very telling that La Repubblica was there as a buffer. 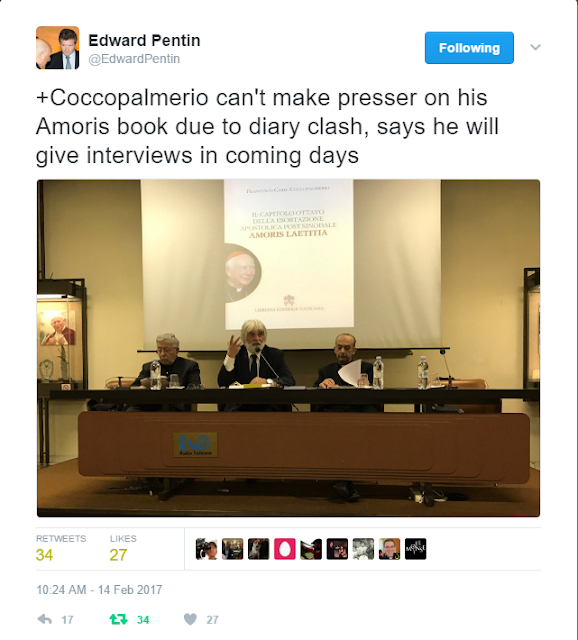 The presser was billed by some as "Francis surrogate to answer the dubia on Amoris Laetitia". Of course, the Pope can't say these things himself because he would be directly contradicting the Magisterium and would thereby depose himself as Pontiff, so it seems he is using these surrogates to do the job for him. This thesis was given weight by Archbishop Scicluna's comments that if anyone has a problem with it, they should ask the Pope!

On Monday the Vatican press office issues a statement from the Council of Cardinals, supporting the Pope. As Phil Lawler reports, it would certainly be news if the Council of Cardinals did not support the Pope. But why was this statement newsworthy? Why did the Council thank the Pontiff in February for a speech he delivered to the Roman Curia in December? Is there any way to see this message as something other than damage control—as a bid to reassure the world that the increasingly evident tensions within the Catholic hierarchy are not tearing the Church apart?

Cardinal Coccopalmerio's book says that a couple should have “absolution and access to the Eucharist as long as – I repeat – there is the impossibility of immediately changing the situation of sin.”

This statement stands in direct contradiction to The Vatican’s doctrinal chief, Cardinal Gerhard Müller, who recently said that this doctrine could not be changed, as it rested on a parallel between marriage and the Eucharist which is essential to Catholic theology. “No power in heaven or on earth, neither an angel, nor the pope, nor a council, nor a law of the bishops, has the faculty to change it,”, Cardinal Müller said.

Despite the billing some gave it, Fr Maurizio Gronchi, a consultant to the Congregation for the Doctrine of the Faith, told reporters that the cardinal’s book is not “the Vatican response” to the dubia posed by the four cardinals.

Irrespective it does appears that we now have arguably the two highest-ranking Cardinals in the areas of canonical interpretation and the protection of doctrine and morals in public, plain, and diametric opposition with each other concerning a crucial canonico-sacramental practice. There's no problem though. Pope Francis is doing a great job!

Division
The factionalism is evident across the Church. The vast majority of faithful I know and keep company with are unanimous in their pain and anguish over this papacy. Sure there are voices who continue to welcome perceived changes to doctrine, as I posted recently, but it seems clear that these are people who do not accept the teachings of the Church in any case. Will changing doctrine win them back into the Church, or will they just continue to do what they want to do and think that an institution that changes what it believes to suit them is even less authoritative than they did before I wonder?

Then you have high profile people like Austen Ivereigh, who I am finding increasingly difficult to understand. Yesterday he tweeted that Pope Francis has defined an authoritative interpretation of Amoris Laetitia and that Bishop Philip Egan, widely acknowledged as the brightest theologian among the Bishops of England and Wales, has incorrectly interpreted the Apostolic Exhortation. I did politely ask him where the Pope's authoritative definition could be found, but received no answer. 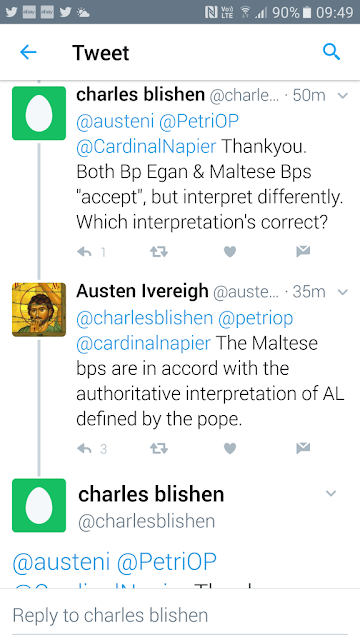 So Austen refers to a definitive interpretation that doesn't exist and claims that potentially the greatest theologian in the Country's got it wrong. One could be forgiven for being puzzled at the lack of consistency and honesty in his approach to supporting this change in practice.

But that's not all. This morning he is attacking priests who are concerned about the division caused by Pope Francis over Amoris Laetitia.

I've studied theology, and moral theology, for five years of my life. I'm not a priest, or a deacon or anything like that, I'm just a normal bloke who cares about his faith deeply, but it is clear to me that to have firm purpose of amendment and yet have no other choice is a strange paradox. As a friend stated, having sex isn't like an addiction where your free will can be impaired.

It is common to fail in terms of firm purpose of amendment when it comes to sin. I confess and pray and resolve with the help of God's grace not to do it again. But do not receive the blessed Sacrament while I am in a state of objective mortal sin.

Most striking is that if I cannot understand the argument here, if it makes no sense to me, how will it be received by the faithful?