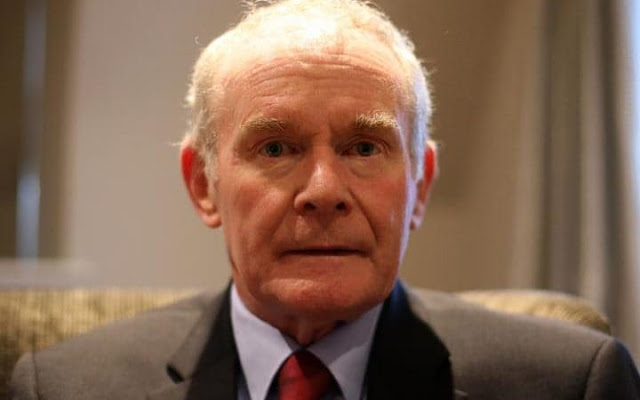 I have to say I was a little shocked at the responses to the death Martin McGuinness at the age of 66 on social media this morning. There has been a really obvious divide between people really praising him and people really decrying him.

Of course, we have to believe that repentance and God's mercy are available to everyone, no matter how heinous their crimes. But we must also remember that McGuinness has robustly defended his actions in the IRA, stating he is “proud” of what he did and will not apologise to anyone — and he has refused to clarify whether he ever killed.

I have thought that he was extremely brave in making peace his priority and being prepared to broker peace with his bitter enemies. Although Lord Tebbit, whose wife was paralysed by the Brighton bombing perpetrated by McGuinness, gives a very different assessment, suggesting that at the point where there was no way forward for the IRA, rather than suing for peace, McGuinness in fact grasped for power.

Whether you agree with Lord Tebbit or not, the fact remains that McGuinness played an instrumental role in the peace process. He renounced violence, and described the dissident elements such as the Real IRA as 'traitors to the cause'.

It is good that he left violence behind and became a broker of peace. I applaud that.


But...From a Catholic perspective Sinn Féin have been a disaster. McGuinness said that the party's abortion policy was 'compatible with his Catholicism'. However the Church teaches that supporting abortion is a grave offense (CCC 2272 f.).

Similarly, McGuinness supported so called same-sex marriage, calling for a referendum on the issue. Pope Francis on the other hand, teaches that

“In discussing the dignity and mission of the family, the Synod Fathers observed that, as for proposals to place unions between homosexual persons on the same level as marriage, there are absolutely no grounds for considering homosexual unions to be in any way similar or even remotely analogous to God’s plan for marriage and family." Amoris Laetitia 251

Notwithstanding all of these facts, the Primate of all Ireland has issued a statement which I found shocking and astounding in equal measure! Archbishop Martin said McGuinness was “a man of prayer” who knew that “peace was worth striving for”. He made these comments in a statement released on the Irish Catholic Bishops’ Conference website.

This is a man who undermined the Church on abortion & SSM. And even if he did appear to turn from violence to peace, he never apologised or owned up to what he was responsible for during that terrible time. By singing his praises, Archbishop Eamon is making a mockery of unequivocal Catholic positions on abortion and same-sex marriage.

In my opinion, this is why the Church has lost all credibility in Ireland. What is the Archbishop teaching here? That your publicly attempting to procure abortion--to actually change the law to allow abortion, the murder of innocents--to take place is a negotiable? That it doesn't matter? That actively working to undermine Church teaching doesn't matter?

Shouldn't the Archbishop just shut up?

“I do not think there are many among Bishops that will be saved, but many more that perish.”
St. John Chrysostom, Extract from St. John Chrysostom, Homily III on Acts 1:12.
abortion Archbishop Eamon Martin IRA Martin McGuinness Northern Ireland peace process Same Sex Marriage