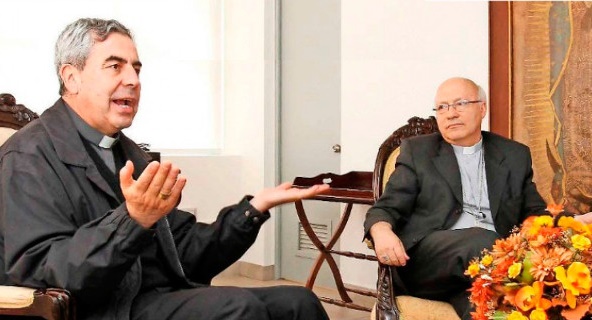 There was some excitement last Wednesday when The Eponymous Flower blog posted an article which strongly suggested that Pope Francis had finally addressed the dubia and re-stated settled Church teaching on Holy Communion for divorced and remarried Catholics. The article states that


Pope Francis has no longer any "doubts", according to the reports of the Chilean bishops who recently made their ad limina visit to Rome. The papal statements reported by them are a radical turn-around. "Since it is unacceptable that the President of the Chilean Episcopal Conference and his Secretary General have invented the words of the Pope, the news is of the utmost importance," said the Spanish columnist, Francisco Fernandez de la Cigoña. "As Fernandez de la Cigoña says," some of the statements sound as if Cardinal Burke had spoken.

I have to say I was extremely sceptical, especially given the criticism endured by this papacy on the ambiguity so far, and the apparent coercion of the bishops of Malta, and others, to forward what appears to be a very determined personal agenda of the Pope.

Obviously this would be a dream come true for faithful Catholics (especially priests and teachers) who currently feel scandalised and confused by his deliberate obfuscation on this issue and the story was circulated with great enthusiasm, even taken up by Raymond Arroyo: 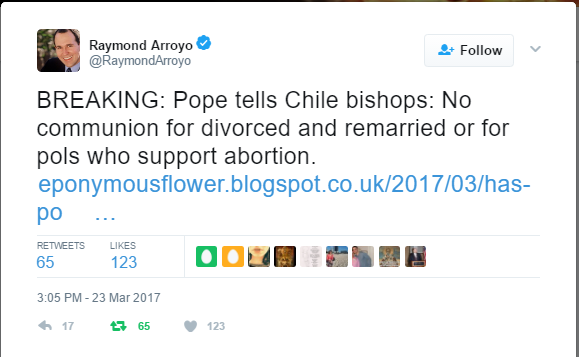 On Friday, Dan Hitchens of The Catholic Herald, posted a very well written analysis of this story which clarifies what has been said and what it means perfectly.


the significance of the Pope’s comments has been greatly exaggerated. Headlines like “Chilean bishops: Pope against Communion for the remarried” go too far.

Apparently, the Chilean bishops were speaking to the newspaper El Mercurio, which paraphrased their remarks and included a few direct quotations.

Hitchens notes that the Pope does say in the interview:
Hitchens notes that none of these statements amounts to either an affirmation or a rejection of Communion for the remarried. He agrees that the story about the nephew-in-law is suggestive. Like the African Catholics Fr Alexander Lucie-Smith blogged about the other day, the nephew is quietly living by Church teaching on Communion. He is aware that, as long as he is having sex outside a valid marriage, he cannot make the resolution “…by the help of Your grace, I will try not to sin again”, and so he cannot be absolved.

He concludes that this may show that the Pope is leaning towards making an explicit reaffirmation of the Catholic doctrine on Communion. But those who are waiting for such a reaffirmation may have to wait a little longer.

I hope and pray he does, but if he does, what are we to make of all the fuss and confusion that he has put THE WHOLE CHURCH THROUGH in the meantime? And, most importantly, where will this leave the Cardinals and Bishops who have spoken out to affirm that they support the heretical direction which HAS NOT been explicitly advocated by Pope Francis? Where will that leave Germany?

Let us continue to pray for the Holy Father and for the Church!