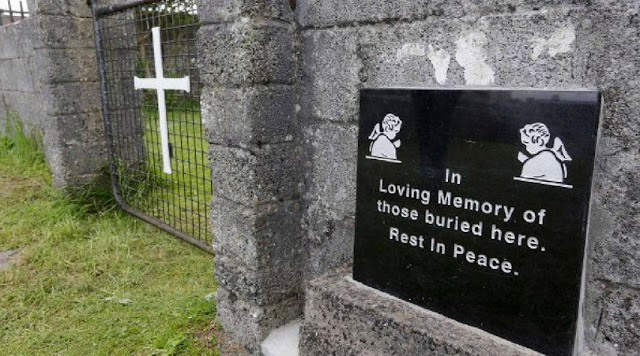 As a person of Irish heritage, I feel drawn to comment on this, or at least to point my readers to some useful facts about this horrible story.

It first broke in 2014 and I posted about it here, giving an eye witness account of the experience in the Bon Secours home.

Now with the release of the results of the investigation into the contents of the grave, the media storm has been re-ignited in full force! What a great opportunity to beat the Church up!

Caroline Farrow has done a great deal of work looking to forensically discover the truth behind the stories, see here.

There is a lot of vicious hatred being poured out in the direction of the Catholic Church in Ireland at the moment as a result of this. No one seems particularly interested in the truth. Caroline says:


One of my points is that while institutional cruelty did exist actually this order doesn't seem to have a bad reputation, like some of the other orders and interestingly, up until this scandal broke there were no survivors' groups from Tuam or this order.
Even Catherine Corless doesn't record physical cruelty.

I think I am just uncomfortable attacking a group of sisters who aren't around to defend themselves of crimes without a shred of supporting evidence. I am also wary of tarring them all with the same brush and of applying today's standards to a different era.

Today's nuns are being called to apologise for something about which they have no knowledge and of which we do not know that their predecessors were guilty of. These types of apologies are nothing more than meaningless gesture politics.

And we also have to look to society and state. The girls were abandoned by their parents, many in poor health who then gave birth to sickly babies in a time before antibiotics.

Caroline has also written this article for Church Militant. There's also this article in Forbes which baldly states that the whole thing is a hoax and explains why, with links to the story in The Irish Times where Corless, who broke the story, denies ever making the "dumped in a sceptic tank" allegation (though this has been completely ignored by the press).

One friend commented to me today that it's not quite a simple a narrative as is implied by the media. One can easily discern this if one looks at what is currently going on in Ireland. This provides clues as to why the particular language we're seeing is being used. As with the Savita tragedy, the timing of these stories breaking in the news is very suspect, indeed, the same day as the report broke in the media about the findings around Tuam, an Irish Times poll had inflicted a major body blow to the push to the supposed support for introducing abortion into Ireland. Also some highly impressive speakers where to speak at the citizens assembly that Sunday (last Sunday) including Rebecca Kiessling, Dr Anthony Levatino and Maria Steen as well as a representative of the Irish Catholic Bishops Conference.

Could it be that this story is a being used as a tool to push an agenda and to damage the credibility of the Catholic Church (which after the sex abuse scandals is very low as it is)? More importantly, would it help to undermine members of the Catholic Church who are standing in the way of the pro-abortion agenda?