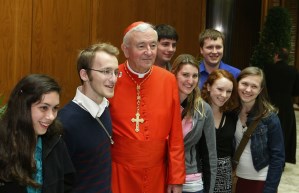 In reality, study after study has conclusively shown that parents, hands down, have a far greater impact on the spiritual life and faith practice of their own children than any youth minister could ever hope to have. This is the case even for teens who get involved in Youth Ministry efforts, mission, trips, and short-term service experiences. In the long run, teens will mimic their parents' faith practice.

This is why stuff like this initiative from the CBEW is just straight up nonsense. We don't need to ask kids what they think, we need to teach them the faith - something that has been neglected for over forty years in this country.

Catholic Youth Ministry needs to wake up and smell the coffee. It is complicit in a series of fundamental myths about teens, and because of this the teen retention rate is a complete disaster for the Church.

It also seems that the Catholic Church considers participation equals retention. If teens are involved in Youth Ministry, they will be well versed in Catholic belief...sort of through osmosis or something. The US National Study on Youth & Religion was a huge wake up call on this theory however. It revealed dismal statistics for the number of young people who could articulate what Catholics believe, even in the most basic tenets of our faith. Unfortunately, Catholic teens scored dead last in every area of the study.

Catholic Youth Ministry is failing and has failed terribly. But to change that will take courage. The courage to recognise what is not working and to ask what really works. That's really hard when you have put so much love and energy into something like working with young people.

But somehow I don't think the current hierarchy are listening or courageous enough to actually do anything that might be successful.

Fortunately, I'm not alone, and there are a few brave souls out there who are willing to fight for the future of our Church and the faith of our young people: