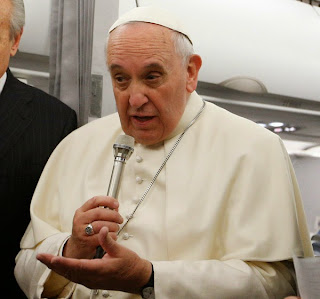 Dr. Joseph Shaw has been reading 70's psychology and thinks he has figured out much of what informs Pope Francis' constant diatribes against "rigid" Catholics, just one of an ever growing collection of insults regularly launched at the faithful from the Holy Father, but certainly a favourite, often returned to.

Dr. Shaw cites a passage by Peter Kelvin, The Bases of Social Behaviour, 1970, which he considers constitutes a concise characterisation of what progressives, in the Church and outside it, in the 1960s and 1970s, thought was wrong with their opponents. He also notes that


"it also seems to match what Pope Francis has in mind when he talks about 'rigid' people. We don't have to imagine that he ever read Kelvin: these ideas which were widespread when the Holy Father was at an impressionable age."

For me, this papacy continues to confuse and confound.
Dr. Joseph Shaw Pope Francis rigid