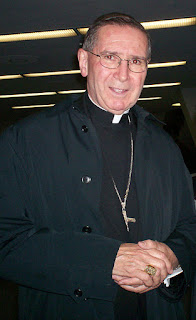 The fact that Mahony’s successor has forbidden him from public ministry in the LA archdiocese due to his woeful handling of abuse cases appears not to matter.


According to Wikipedia, Mahoney has been an instrumental figure in working to cover up sexual abuse in the sexual abuse scandal, relocating dozens of priests in order to avoid prosecution and aspersions being cast on the Catholic Church.

So how has Pope Francis come to the decision that Mahony should be given this honour? Well it is interesting to note that Mahony was one of the cardinal electors who participated in the 2013 Papal conclave that selected Pope Francis. A fact which drew considerable dismay from Catholic quarters at the time. It is also worth considering that the diocese Mahony is being sent to is known for loyalty to the true Faith. ++Chaput is presiding & preaching. They'll have asked the Holy Father for a Legate, to send Mahony is a deliberate (and nasty) message.
abuse crisis Archbishop emeritus Roger Mahony L.A. Archdiocese Pope Francis