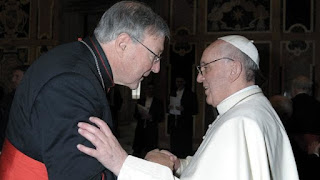 As the news breaks that Detective Superintendent Paul Sheridan testifying at Melbourne Magistrates' Court, gives evidence that the investigation into Cardinal Pell began in March 2013 to ascertain whether he had committed crimes which had gone unreported, in other words Tethering set out looking for a crime to fit up the Cardinal, because no crime had been reported, The Australian reports that, in Cardinal Pell's absence, the reforms he actioned for the Secretariat for the Economy and the office of the Auditor-General are being revoked and re-written by the corrupt Vatican officials he was charged with sorting out. Frankly a blind puffin from the Faroe Islands could have guessed this is how things would unfold:

(Paola Totaro) The Vatican “old guard” accused of undermining Pope Francis’s ­attempts to root out financial corruption in the Holy See are exploiting Cardinal George Pell’s absence as he fights sex charges in Australia to jettison the reform program. Senior Vatican sources have told The Australian that the Secretariat of State has quietly embarked on a rewrite of the statutes governing both Cardinal Pell’s powerful Secretariat for the Economy and the office of the Auditor-General which, if signed by Pope Francis, will “dilute its powers” to investigate corruption and clean up financial and property dealings.“If this happens, if there is a new statute and the Pope signs it, these offices will never be able to achieve what they set out to do,” one source said. “Cardinal Pell has said that he wishes to return to complete the reforms when he has cleared his honour. These were not reforms for the Pope, they were wanted by the Pope for the 1.4 billion Catholics around the world who donate money to their church or leave their property and who deserve to know what the church is doing with their gifts.”

Cardinal Pell was granted leave by the Pope to fight historical sex charges and returned to Australia on July 10 last year.

Mr Milone broke his silence three months later by saying he was forced to step down on “fabricated” charges of “spying” after uncovering evidence of potentially illegal financial activities.
These events, sources say, are related and those blocking the reforms contributed to Cardinal Pell’s departure as he and the auditors had edged closer to understanding a sophisticated and layered network of financial mechanisms that protect and ­obfuscate the identity and origin of donors to the church and their beneficiaries.

And while the Vatican claimed Mr Milone would be replaced immediately, eight months later both Cardinal Pell’s and the Auditor- General’s position remain vacant.
It is understood that Cardinal Pell has told his closest associates that he intends to return to his position as his five-year mandate does not expire until 2019. “He has said: ‘When I come back, I still have a year to complete the reforms.’ There have been moments when he was pretty down, but he is a man so focused on the rules … he will be determined,” an associate said.
“If he is cleared and it is proved he has done nothing wrong, he returns as a winner and may have more power … Yes, some say he will still be tainted, but knowing him, he will not come back a lame duck.”

The Australian has been told that when Pope Francis appointed Cardinal Pell, he personally warned potential senior co-workers that the Australian had a “brusque” manner but that he was the right person for a difficult job.

Cardinal Pell and Mr Milone’s departure unfolded just over a year after an external audit of Vatican finances by global financial firm PricewaterhouseCoopers was halted without explanation.
Cardinal Pell said at the time that he was “a bit surprised” by the suspension and anticipated the audit would “resume shortly”.

The suspension was announced by Archbishop Giovanni Angelo Becciu, a senior official within the Secretariat of State who, sources told The Australian, was deeply sceptical of Cardinal Pell’s approach to financial reforms.

The Secretariat, headed by Cardinal Pietro Parolin, handles the Vatican’s political and diplomatic affairs. However, it was Archbishop Becciu, not Cardinal Parolin, who announced the audit would not go ahead in a letter telling staff they did not have to ­provide documentation to Attempts to stymie reform began almost immediately after Pope Francis appointed Cardinal Pell to head the economics secretariat in 2014. At the time, Cardinal Pell’s department was given the same hierarchical position as the powerful Secretariat of State. However, the bureaucratic turf war grew to a crescendo quickly after Cardinal Pell’s department announced it had uncovered ­nearly €1.1 billion which was not recorded in financial statements — €94 million of it in the Secretariat of State.
Cardinal Pell’s responsibilities were also initially expected to include governance and oversight of APSA (Administration of the Patrimony of the Holy See), the Vatican’s biggest financial assets including global real estate and personnel.

APSA, described by the National Catholic Register as a “haven for corruption greater than the Institute for Religious Works, otherwise known as the Vatican Bank”, also vehemently opposed the financial reforms and, early in 2016, clawed back its power to oversee the Vatican assets from Cardinal Pell’s department.

APSA is headed by Cardinal Domenico Calcagno, who is currently facing embezzlement charges from when he was Bishop of Savona in northern Italy. Sources said they believe Jean-Baptiste de Franssu, the French financier who is president of the “Vatican Bank”, has been a strong leader in the clean-up of the institution.

The trial of Angelo Caloia, Vatican Bank president from 1989-2009, on charges of embezzlement began this week.

Mr Caloia and his lawyer, Gabriele Liuzzo, were allegedly involved in a scam in which Vatican-owned real estate was sold below valueto offshore companies that resold the assets at market rates.

It has been reported that the suspects allegedly profited from the difference.