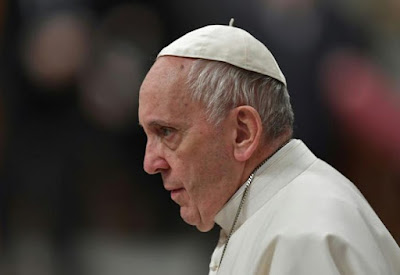 Some journalists have noted that any allegations of clerical abuse from Argentina or Chile tend to be kicked immediately into the long grass. The media who love Pope Francis, just aren't interested in following up these allegations and seeing if there's anything credible about them.


On May 26, 2018, high-profile Vatican journalist Marco Tosatti posted on his blog an explosive story about Francis’ past in Buenos Aires that was removed again after publication without explanation. Although these allegations are mainly gaining ground and being circulated on sede-vacantist internet sites, it's clear the allegations come from the mother and the victim. So far it seems Catholic journalists are just too gutless to follow up the story. Damian Thompson has put the bare bones out on Twitter along with a challenge!

A cached copy of the post is available online here. A Portuguese translation of the Italian text was published at Fratres in Unum, and another Traditionalist web site Tradition in Action has made available an English report on the contents of the Tosatti post, with additional commentary. Here is some of that post with a link to the full text:

BERGOGLIO ENTANGLED IN ANOTHER COVER-UP — On May 26, 2018, journalist Marco Tosatti from La Stampa in Turin, Italy, posted an article on his website Stilum Curiae reporting the involvement of Pope Francis in a cover-up for a pedophile priest in Buenos Aires when he was Archbishop of that city. The article refreshed some little-known old data reported by the Spanish blog Publico. Soon after, however, Tossatti’s article was removed from that site, probably due to pressure from the Vatican.
Nonetheless, his full article had been transcribed by another Italian website – Acta Apostolicae Sedis. The reader can find a snapshot here; the second part of the posting is Tossati’s article. The Brazilian blog Fratres in Unum made the piece accessible in Portuguese, where I found it, with its various Spanish and Italian links. I thank the blog for this important public service. I am translating the data into English and passing the information on to my readers.
The case history & cover-up
In May 2013, the Appeals Tribunal of Quilmes, Buenos Aires, Argentina, confirmed a sentence by the City Court condemning the Diocese to pay US $27,000 (115,600 pesetas) to a victim of pedophilia to compensate for his psychological treatment and the moral damage he suffered.
Soon after in that same May 2013, the Spanish blog Publico highlighted the the case of a 15-year-old Argentinian – Gabriel Ferrini – who had been abused by Fr. Ruben Pardo in 2002. Immediately after being sexually violated, the youth reported the crime to his mother, Beatriz. She went to the Bishop of Quilmes, Luis Teodorico Stöckler.
The Diocese of Quilmes is subordinate to the Province of Buenos Aires whose Archbishop at that time was none other than Jorge Bergoglio….
>>> CONTINUE TO FULL ARTICLE

Below is a partial screenshot of the post as it appeared on Tosatti’s blog Stilum Curiae on May 26 but has since vanished without explanation: Of course, it is essential to remember that accusations are one thing, and guilt is another. Not everyone who is accused is also guilty. However, we can only hope that the Vatican addresses this issue in short order.Additional details on this case, in English, can be found here:
Detailed Summary of Case of Rev. Rubén Pardo, Drawn from Media Coverage and Legal Documents
“The Pope Covered Up Priest’s Abuse of My Son” (English translation of Publico article)

This is deeply troubling, but sadly I am not surprised. My experience tells me that personal sin tends to be at the root of liberal attitudes in priests. We have seen the way the Pope has failed to deal with the crisis which has unfolded in Chile, even scolding those who were trying to inform him of the reality of the situation there.

Any secular article you read about Pope Francis bills him as "the great reformer". They ignore his inconsistencies and mistakes because they hate the Church and the morality that it stands for. Sadly it seems the Vatican only wants to appease this direction and show the world how reasonable it is. But there are fundamental elements in Catholicism which can never be reconciled to modernism without accepting that the revelation the Church is built on does not have a divine origin. Ultimately, the further down the path of appeasement we travel as a community, the further we move towards self-destruction. We stand on this: either the Gospel revelation is truth or it is not. When we start to say bits of it are wrong, or we have misunderstood it, we betray Jesus Christ.

"but whoever denies me before others, I also will deny before my Father in heaven."  Matthew 10:33