Funny how Ted McCarrick could wander around molesting seminarians for years and he’s promoted and protected by Rome. But whistleblower Vigano? Satan!!!
— Damian Thompson (@holysmoke) October 7, 2018

Cardinal Ouellet is another one of those Cardinals who we once thought was on the side of the Church. Under Pope Benedict XVI he appeared very orthodox and holy, but under Pope Francis, we have seen a much more political side to the Canadian prelate.

In his 2015 book Mystery and Sacrament of Love published prior to Amoris Laetitia. , the Cardinal explained that it is impossible for the divorced and remarried to receive Communion. Yet in a talk he gave last year, he expressed the opposite opinion, stating that the Pope’s 2016 exhortation Amoris Laetitia “may open a door” for civilly-divorced-and-remarried Catholics to receive Holy Communion. He said that some saw in the Pope's teaching "the good news of an openness."

In my post on Raymond Arroyo's World Over interview with Cardinal Gerhard Müller, I noted that the Cardinal said that the Pope is influenced by "friends" who seek to change Church teaching in order to be more accommodating to the world. It is not difficult to see what that world looks like either: 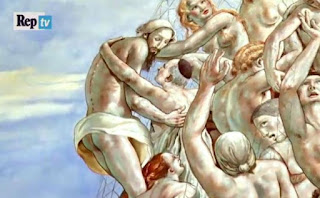 Now Cardinal Ouellet, who's malleable credentials we have just qualified, is wheeled out to launch a blistering and quite personal attack on Archbishop Viganò.

This is a strategy which has become familiar over the course of this papacy. First the Pope says he will not say a single word about the allegations. He then spends a whole week attacking using the holy Mass as a vehicle for his vitriol, then he wheels out some friends to defend him. Friends with sympathies that might effect their position? Like Cardinal Ouellet's brother who has a conviction for abuse?

Notwithstanding his attack, Cardinal Ouellet's letter does confirm a central claim made by the archbishop — namely, that allegations about Cardinal McCarrick were known well before June of this year and resulted in some sort of censure, even if informal. Mgsr Charles Pope notes today that this helps to confirm his main thesis: that in these difficult days, many are compelled to speak out and express rightful anger. And, though these methods have become regretfully necessary, they are effective and must continue if reforms are to happen.

There's much been made of all this, there's lot of very interesting analysis easily found on Twitter:

This comment on one of @roddreher's posts makes the astute point that in his Open Letter to +Vigano, Cardinal Ouellet has conflated the one-to-one meeting of Vigano with Pope Francis, on June 23rd 2013, with the Pope's audience with all the Nuncios on June 21 (h/t @Game_of_Jane) pic.twitter.com/s475HjbBqX
— Catholic Sat (@CatholicSat) October 8, 2018

The best summary of the latest development in the Catholic abuse crisis is the headline of this @FrancisXRocca story: “Vatican Denounces Accusation Against Pope but Confirms Key Point”https://t.co/tO2bLCVnzb
— Matthew Schmitz (@matthewschmitz) October 7, 2018

But for me, the idea that Vatican officials protect prelates accused of abuse, but take the offensive against an archbishop who, by questioning policies, puts himself outside the protection of the episcopal club is the clearest example of 'clericalism' in action I can envisage.