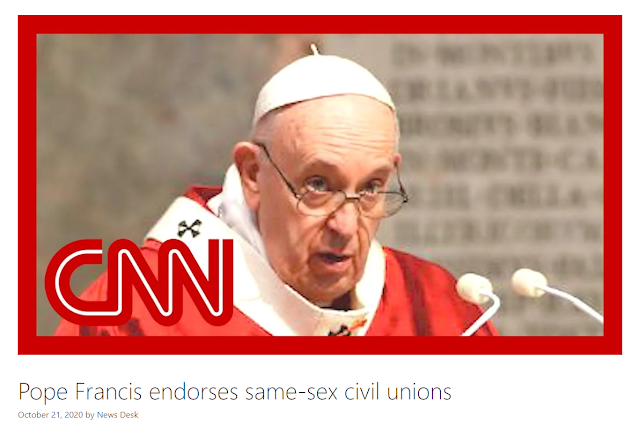 I think the fact we are all so ready to believe this speaks volumes about where we are in terms of Church leadership at the moment, but the truth is he didn't say what he is being reported as saying.

Here is a quote from someone on a forum, hardly authoritative, but having checked it out, I think it is accurate:

“If you watch the original interview in Spanish (my mother tongue) you will see that he used the words “Leyes de convivencia civil” which in no means is linked to “union civil”. What Pope Francis talked about were “coexistence laws” to protect people with same sex attraction among other civilians in coexistence in society. He sees the suffering of the children of God and knows they are persecuted in many countries. But NEVER was he in contradiction with church teaching.”

It also seems fairly clear (even from just watching the original footage) that he was not talking about same-sex-attracted people “having families” (i.e. children), but rather, he was saying they should not be kicked out of their own families for having that attraction.

Basically all the media jumped upon a translation of a few lines from the middle of an interview and presented it as if it was a major papal pronouncement.

It does appear that this really is all a load of “fake news”.

This appears to have begun with a report from CNA - who I tend to trust. The headline is:

“Homosexuals have a right to be a part of the family. They’re children of God and have a right to a family. Nobody should be thrown out, or be made miserable because of it,” Pope Francis said in the film, of his approach to pastoral care.

After those remarks, and in comments likely to spark controversy among Catholics, Pope Francis weighed in directly on the issue of civil unions for same-sex couples.

“What we have to create is a civil union law. That way they are legally covered,” the pope said. “I stood up for that.”

This now appears to be a confused translation.

Although the original article remains unaltered, CNA have now posted an "explainer" article which goes some way towards qualifying the information in the original report:

But it is too late. The story has run on every major news outlet throughout the world.

We can't blame the secular news for misunderstanding this pronouncement. It desperately wants the Church to drop the truth of its ages old teaching and "catch up" with modern, secular thinking. If a pope said such a thing, it would constitute a major victory and mean that the Church was wrong all along, vindicating all those who reject the Gospel message.

What is much worse is people like Fr James Martin and Rich Raho who have assumed that the Pope is doing what they have longed for him to do, overturn settled Church teaching, and they are pronouncing their new gospel from the rooftops. 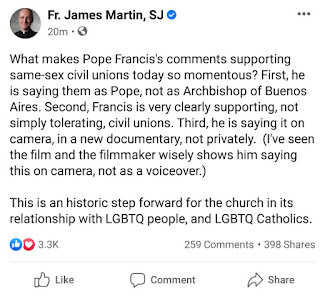 Fr James has blocked me (I don't know why, I've never engaged directly with him or been rude to him) so I can't embed his real tweet, this is a picture someone else posted.

The question for me really is - given the amount of noise this has made, will the pope clarify? Will the Vatican release something? Bishops in the US are posting repudiations of the Pope's supposed endorsement of civil unions: 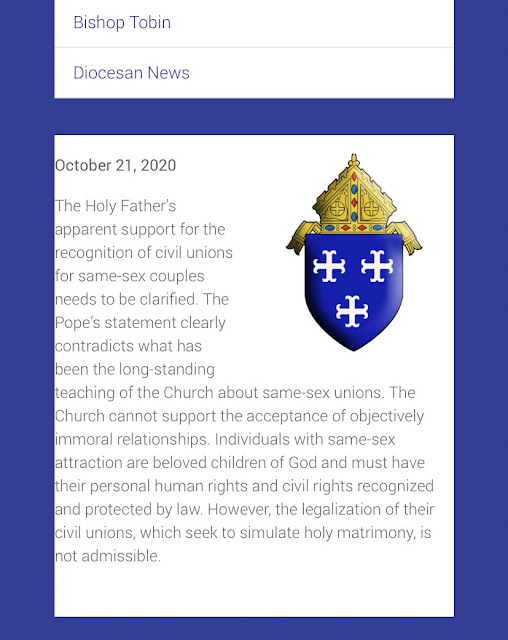 Archdiocese of New York here complete with a caveat, added later, that this is not the official position of the Archdiocese.
So what do we have? What we always have with Pope Francis: CONFUSION!
But regardless:
Church teaching is not determined by every off hand comment or remark a pope makes. This is the Church's teaching on this issue:

"The Church teaches that respect for homosexual persons cannot lead in any way to approval of homosexual behaviour or to legal recognition of homosexual unions. The common good requires that laws recognize, promote and protect marriage as the basis of the family, the primary unit of society. Legal recognition of homosexual unions or placing them on the same level as marriage would mean not only the approval of deviant behaviour, with the consequence of making it a model in present-day society, but would also obscure basic values which belong to the common inheritance of humanity. The Church cannot fail to defend these values, for the good of men and women and for the good of society itself."

it can be distilled as per the following tweet from Edmund Adamus:

the need to avoid confusing marriage with other types of unions based on weak love is especially urgent. It is only the rock of total, irrevocable love between a man and a woman that can serve as the foundation on which to build a society that will become a home for all mankind. pic.twitter.com/vyef8aQ0Fg