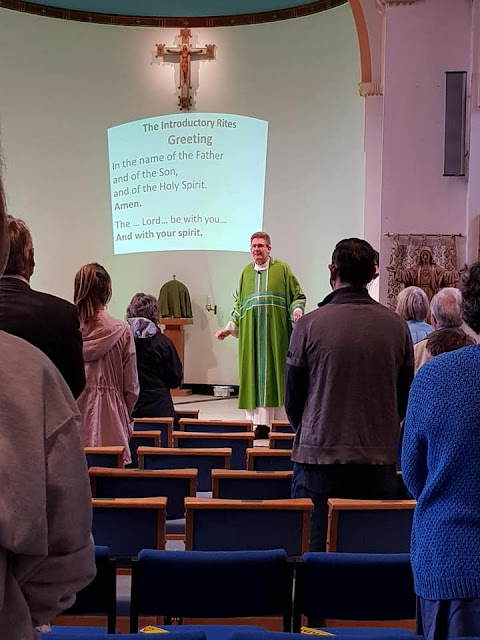 Well that was quick!

Following my last blog post reporting on the shocking appointment of a priest with pro-abortion views to Allen Hall Seminary as Pastoral Director, the move has been canned.

This is how the diocese announced it:

PASTORAL DIRECTOR, ALLEN HALL SEMINARY Fr Philip Dyer-Perry has given further thought to his appointment as Pastoral Director at Allen Hall Seminary and his prayerful discernment has led him to ask the Cardinal for permission to withdraw. This request has been granted. The Cardinal thanks Fr Philip for this searching discernment and for his continuing reflection. Fr Philip will continue his ministry as Parish Priest at Staines-upon-Thames. The appointment of the Pastoral Director is pending.

Fr. Philip will continue his current ministry as parish priest of Our Lady of the Rosary Church in Staines. All I can say is God help Staines!
No doubt this is due to the publicity — Church Militant have followed the story and featured it prominently in their evening news programme. And no wonder. It is incredible that a Catholic Priest with such erroneous views is allowed to continue in public ministry at all, let alone might be singled out for a prominent position forming young men for the priesthood.
It might be that the diocese were swayed by having a light shone on this decision, which begs the question why did they think he was the right man for this job? They either didn't know about his opinions on the female nature of God, abortion for disabled children, support BLM and so-called "gay marriage" or they thought these views were acceptable. If the former, they are incompetent. If the latter, we have even bigger problems than we thought!
Despite these views now being brought out into the open, it doesn't seem anything has been done to help the poor people of his parish in Staines who, judging from the reaction on the Parish Facebook page, think Fr. Phillip is the best priest in the world.
This doesn't surprise me. The most popular priests are often those men who mistakenly abandon the hard task of preaching the metanoia called for by Jesus and instead affirming people in their sin and error. Take Fr James Martin SJ for a perfect example, a man with more social media following than any other Church leader. A priest who appears to be rejecting the teaching of the Church and endorsing secular culture naturally appears to be "with it" to a community of Catholics who lack any proper catechesis. How can they be catechised with Fr Phillip as their Pastor? I have received first hand reports from trained catechists who have worked with him in the past and have been left embarrassed and frustrated by the numerous heretical positions he teaches.
That the diocese were thinking of taking such a young, active priest away from a parish given the current desperate shortage of priests is interesting in and of itself. I think it is completely possible that the diocese knew Fr. Phillip is a problem and thought a stint at the seminary would help him; surrounding him with orthodox, intelligent educators & placing him in an environment of priesthood & prayerful preparation for ministry he could reflect on his experience in active ministry. Perhaps. But this is a risky strategy — Fr. Phillip would be as likely to negatively effect the seminary as it positively effect him and, if he needs help, surely better to be upfront and straight forward about providing it? Perhaps assigning a trusted mentor or moving him to work with someone else who could help him?
The fact that it is all so secret and surreptitious doesn't help anything, especially not public trust, or the trust of the diocesan clergy. The withdrawal, while welcome, makes it look like no one has a clue what's going on in Westminster and it could easily be the case that no one knew these things about Fr. Phillip (all of which are very much in the public domain) which is extremely worrying. Certainly a lot of clergy seem willing to believe this is the case.
To allow a priest like this to continue his ministry, perhaps because people like him, is a shocking error by the bishop responsible and a very dangerous game for the Church in Westminster as it can only lead to people abandoning the Church, convinced the true teachings are misguided and the Church needs to get with the times.
We must take more care with issues like this.
Allen Hall Father Philip Dyer-Perry priests