Who Teaches The Faith in England & Wales?

Well, the bishops you might say. God help us I say!

Today is the feast of John the Baptist, why then are the Catholic Bishops of England & Wales pushing out a photo of a window which depicts the Nativity of Our Lord Jesus Christ? 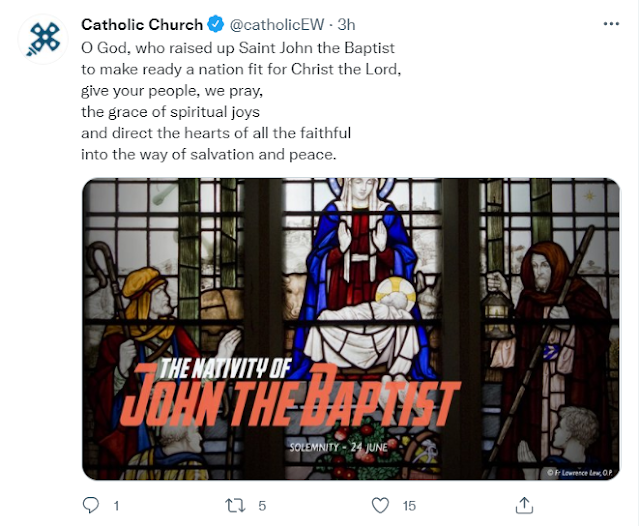 They rightly attribute the photo to Dominican priest Father Lawrence Lew, who has had to correct the error on the Facebook version (still up at the time of writing!): This speaks to the utter lack of Catholicity at the Bishop's Conference and their preference for employing "cultural Catholics".

"Anyone who actually believes the faith would spot all the errors"

A priest once quipped to me.

It's easier to have people working for them who don't know or care much about the Catholic faith. Time and time again we hear about the bullying, sidelining and expulsion of faithful Catholics from so-called Catholic organisations including schools where the practice of promoting pseudo-Catholics to high ranking positions has reached epidemic proportions!

As a governor in a Catholic Secondary School, asking teachers to explain what it meant to "put Christ at the centre" (the catch phrase they all used on their CV's) was amusing sport. If someone had a decent answer, it was clear their application should go forward, however I often found that thwarted, on occasion by the Director of Education for the Diocese who once told me "there's more to school than getting to heaven, for example the small matter of exams". He was a priest.

I think the first thing we should be looking for in those who apply to work in Catholic institutions is Catholicity: a love of the faith and a basic knowledge of it are vital in the work of evangelisation.

It's not rocket science!

"You, child, will be called the prophet of the Most High; for you will go before the Lord to prepare his ways, to give knowledge of salvation to his people in the forgiveness of their sins" (Lk 1:76-77)
Medieval window from Sta Maria Novella, Florence.https://t.co/6jadDUwEtT