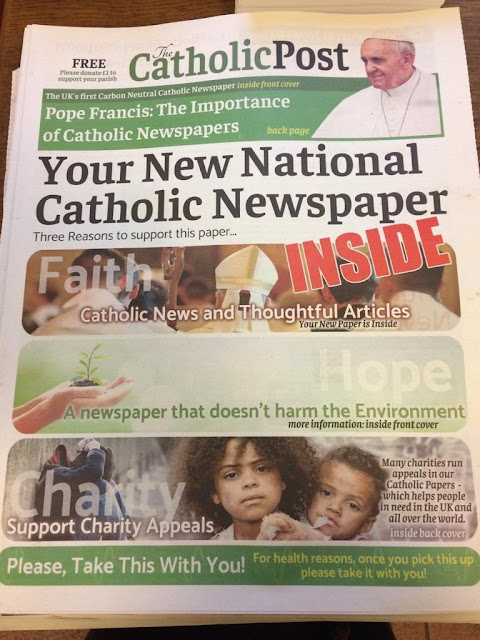 Reports have been coming in to me this week of a new Catholic newspaper being delivered to Parishes. The Catholic Post (better entitled The Non-Catholic Milquetoast). Priests have been sending me pictures and telling me they've thrown the whole lot in the bin, or found other, more creative uses in some instances. 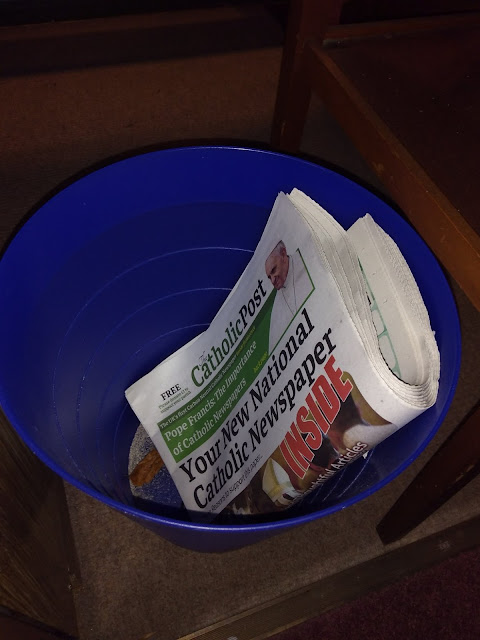 1. Pope Francis says buy Catholic newspapers like this one - so buy it or you're not Catholic!

2. Catholic news and thoughtful articles are inside. 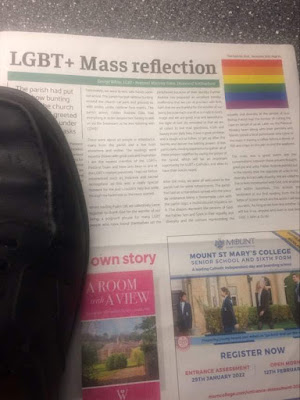 What on earth is going on? Who is behind this initiative and who is funding it? Have any bishops backed it, endorsed it or allowed it to be called Catholic?
John Smeaton, former CEO of SPUC contacted me to point out his article on this paper, you can read it here.
Smeaton states:

A story taking up the whole news space on one of its pages is headlined “LGBT+ Mass reflection”. A subtitle reads, “The parish had put rainbow bunting around the church car park and greeted us with smiles under rainbow face masks”. A rainbow flag is emblazoned on the top right hand corner of the story, which gives an account of a special Mass for the LGBT+ Pastoral Team of the Diocese of Nottingham, celebrated by Bishop Patrick McKinney, the Bishop of Nottingham, in Cleethorpes, Lincolnshire.

According to Gilbert Baker, the artist who created the rainbow symbol in 1978, flags are about proclaiming “power”. As Dr Tom Rogers pointed out in an article published by Voice of the Family in September 2021, the power of the LGBT+ agenda permeates the teaching of Bishop McKinney and that of the Catholic Bishops’ Conference of England and Wales.

The technique used by the bishops to promote the LGBT+ agenda is to obscure the distinction between homosexuality and homosexual persons.

The Catholic Post story borders on blasphemy — as, indeed, does Learning to Love, the document for Catholic educators backed by the Catholic Bishops of England and Wales.

The Catholic Faith has been highjacked by villains it seems to me. The Synod on Synods office recently included a link to the banned LGBTQI group New Ways Ministry in its resources. This is a group which openly seeks to change doctrine. The office then removed the link once it was pointed out this group had been sanctioned by the US Bishops Conference. In 2010, Cardinal Francis George, then president of the United States Conference of Catholic Bishops, issued a statement emphasizing that New Ways Ministry “has no approval or recognition from the Catholic Church and that they cannot speak on behalf of the Catholic faithful in the United States.” They also received a notification by the Vatican Congregation for the Doctrine of the Faith in 1999.

The removal wasn't a mistake. Thierry Bonaventura, communication manager of the General Secretariat, told CNA on Dec. 7 that the link on the website synodresources.org had been taken down. He said:

"...even if we are open to receiving any useful resources without a particular censoring of the material, it is our desire to welcome inputs from officially recognized organizations by the Catholic Church.
In this case, my team was not aware of the situation of the New Ways organization and of the clarification given by the USCCB President in 2010.”

It then reinstated the link and apologised for any offence caused.

I don't understand the thinking with all of this. I totally understand welcoming people to the Church and not judging and all that stuff, but if we are not going to explain Jesus' clear message for the way to live your life and offer a viable alternative to secular society, what use are we to anyone?

If we pretend we teach something other than what we teach, how does this help our credibility or anyone seeking Christ? Do they think people will just forget the Church has always taught homosexual acts are sinful?

Apparently this paper is mentioned in the Westminster ad clerum:

Not a terrific surprise, as this month's issue of the Nottingham diocesan newspaper, the "Catholic News", has pretty much the exact same story in it, on p. 10: https://t.co/4jVjJH06nM (see pic) https://t.co/gOEDDFd0RC pic.twitter.com/NoDLszRjR3