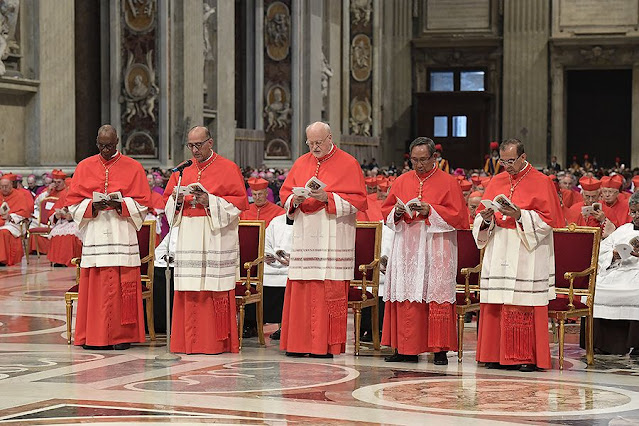 Pope Francis named today to the College of Cardinals a pro-gay ultra-progressive who turned a blind eye to sex abuse. Namely, the bishop of San Diego, Robert McElroy. McElroy has distinguished himself by supporting causes close to Pope Francis’s heart and by having a consistent opposition to the teaching of the Catholic Church in a number of areas. He objects to Church teaching on abortion, divorce and “remarriage,” homosexuality, and the priesthood, and was described by America’s Vatican correspondent as being, “recognized in Rome as a top expert on the social doctrine of the church.”

McElroy's appointment must be a clear endorsement of the man and his agenda. But it is also a blatant snub to Archbishop Cordileone. This appointment is unthinkable and unworkable in any other papacy as San Diego is suffragan of Los Angeles. But Pope Francis has done worse. In 2017 he made an auxiliary bishop of San Salvador a cardinal while the archbishop was passed over. Absurd, but purposeful.

Back in 2019, McElroy caused murmurs among the bishops after he stood against the conference' condemnation of abortion:

Bishop McElroy tells #USCCB2019 that for the bishops to call abortion the "preeminent priority" in forming consciences for faithful citizenship is discordant with Pope Francis' teaching, and a disservice to the faithful.

You can read the whole thing here.
What's clear is that McElroy is controversial even among the US Bishop's conference.
Rod Dreher links McElroy with a 2016 letter that Richard Sipe, the (now-deceased) psychotherapist and foremost expert on the sexual habits of the Catholic clergy, sent to him back in 2016. McElroy refused to meet with Sipe to discuss the contents which demonstrate he is deep in clergy abuse cover-up. So how can we say Pope Francis is serious about cleaning up abuse?
Moreover, Francis has already demonstrated that he IS NOT interested in anything other than promoting and covering up for abusers.
On top of this disastrous appointment, Francis also named today a longtime curial official — he runs the Vatican city-state — and senior member of the disgraced ultraconservative Legion of Christ.
Dreher writes:

"You will recall that the LC was founded by the late Father Marcial Maciel, a grotesque pedophile who had a secret family, among many other horrendous sins, and who ran the wealthy, militantly conservative religious order like a cult. There are a number of conservative, orthodox Catholics who cannot understand why the Vatican did not dissolve the Legion after Maciel’s evil was exposed. And now Pope Francis, the progressive pope, has elevated one of their own to the ranks of Cardinal.

McCarrick and Maciel: the indifference of this Pope to the reality of what abusive priests, including senior clerics like McCarrick and Maciel, did to victims is beyond my ability to explain, other than utter vanity and vainglory."
Dreher doesn't mention that this is the second legionary made cardinal by Pope Francis: the camerlengo was also ordained in the Legionnaires. Kevin "I don't know anything about McCarrick" Farrell was ordained to the priesthood for the Legion of Christ by Cardinal Eduardo Pironio in Rome on December 24, 1978. After his ordination, Farrell served as a chaplain at the University of Monterrey in Monterrey, Mexico, where he also conducted seminars in bioethics and social ethics. In the early 1980's, Farrell left the Legion of Christ and was incardinated in the Archdiocese of Washington.
Another of Francis' choices this consistory is Arthur Roche, the inept former bishop of Leeds who was "kicked up" to Rome before he could completely bankrupt the diocese of Leeds. Roche is the author of the disastrous Traditiones custodes and this cardinalate is his thirty pieces of silver for doing Pope Francis' dirty work.
There was quite a lot of speculation that Roche was out of favour after the responsa he issued drew hugely negative reactions across the Church and Francis then seemed to signal that Traditiones custodes didn't apply to everyone.
At this point, it just looks like open simony. The only worst appointment was Grech, promoted over Scicluna despite a reputation for cover up and bullying for leading on the Maltese guidelines.
Francis is not only packing the consistory, he is making corrupt men who do not hold to the teaching of the Catholic Church the men in charge of her future. Just devastating.
Bishop McElroy Cardinals consistory