Cardinal Gerhard Müller, former Prefect for the CDF, removed by Francis speaks to John Henry Westen about some of the madness going on in the Church at the moment.

He says no one understands what is going on with Pope Francis and the August consistory and expresses concern about the appointment of Bishop McElroy to the Cardinalate. He says it makes no sense that this suffragan bishop has been appointed over his superior: Gomez, who is a good, faithful bishop. The Cardinal states that this strange move seems to stem directly from a misunderstanding of the Church in that it is an attempt to politicise the Church, seeking to change the Church to fit certain political agendas and to support political agendas. Here he is clearly stating that McElroy and the Pope are blatantly attempting to support Biden and are putting this political approach above a theological and moral approach to the issues of life and moral integrity.

Cardinal Müller flatly condemns McElroy's promotion of issues like concern for the poor to the same level as life issues. He says this is wrong and a misunderstanding of the Catholic faith. The first issue must be the right to life. Moreover, this strategy has often been exposed as a tacit support for abortion and other evils (Trent Horn explains this in detail at the beginning of this video where he discusses the issue in the context of Nancy Pelosi's being banned from Holy Communion).

On Fr James Martin, Cardinal Müller frames his thoughts within his loyalty to the papacy but not individual popes. Obviously this suggests that Pope Francis is trying to change doctrine. Müller states baldly that Fr Martin's direction an action is a heresy. It cannot be excused as "pastoral work" because you cannot justify the sin, which is what James Martin does all the time. 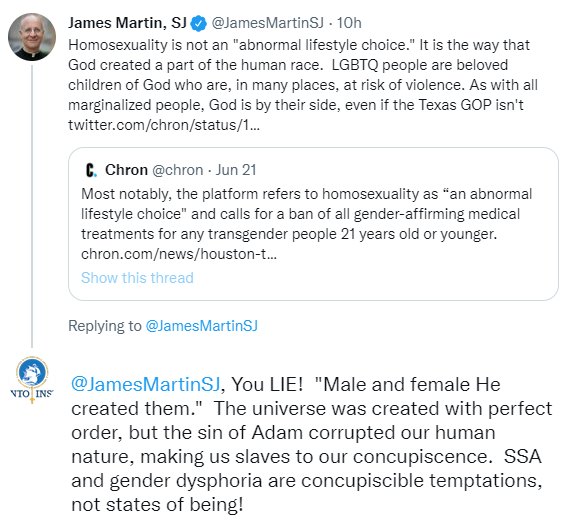 Cardinal Müller also condemns the rejection and abandonment of Cardinal Zen and condemns the approach that tries to normalise the CCP approach to the Catholic faith.

Interestingly he says "I am not a Jesuit. I have not to say if the majestry is saying the black page is white that is white, no no" - a direct attack on Jesuit sophistry which is the hallmark of the Bergoglian papacy.

He suggests Fr James Martin and the Pope - all those who are pushing in this direction - should read Gaudium et Spes (Vatican II Pastoral Constitution on the Church in the Modern World) to discover what the authentic teaching of the Catholic Church is on this matter. This is another pretty thinly veiled attack on Pope Francis's recent nonsensical ramblings about the Council.

As always, Cardinal Müller is great to listen to because he clearly articulates the teaching of the Church is easily comprehensible language. And it feels that we rarely hear that any more. His confidence that doctrine cannot change on issues like homosexuality seems at stark odds with the current direction of the Papacy of Jorge Bergoglio. One has to wonder how many Cardinals, Bishops and priests are with Cardinal Müller in clearly teaching the Gospel, and how many are on the side of the Pope in betraying and destroying that teaching and slowly but surely leaving the Gospel behind.