The Francis Pontificate: Dialogue with Disaster

The Pope continues, day by day, to dismantle Catholic authority and legitimacy. EWTN's World Over Live provides an expert regular round up of what is going on in the Church. It has become a kind of cataloguing of the weekly errors coming out of Rome.

The episode below covers some of the things I have not had a chance to post on over the last couple of weeks. Indeed, I haven't really had the heart!

The Pope's long interview with Reuters is covered along with his lack of continuity with regard to abortion and Holy Communion. Robert Royal nails it when he says the Pope does not have a clear position on this issue. The Pope's words mean nothing if he is going to act against those words. Pretty much everyone I have spoken to about this is simply disgusted by the Pope's actions. The silence of the Church standing against this issue: if there is no penalty for contradicting doctrine, what's the point of having it even?

On the Pope's involvement of women in choosing bishops, Fr Murray thinks the Pope has bought into the critique that the Church is unjust because it doesn't allow women to run the Church in some fashion. However, inviting the sheep to choose shepherds is a clericalisation of the laity which is not appropriate to their calling.

With respect to his reported resignation the Pope, he says the idea never even entered into his head. This shows his mixed messaging.

Discussing the disastrous Chinese deal, Raymond Arroyo demonstrates how baffling the situation is by quoting a formally excommunicated "bishop" illegitimately ordained by the Chinese Communist Party, giving a homily at his cathedral recently: 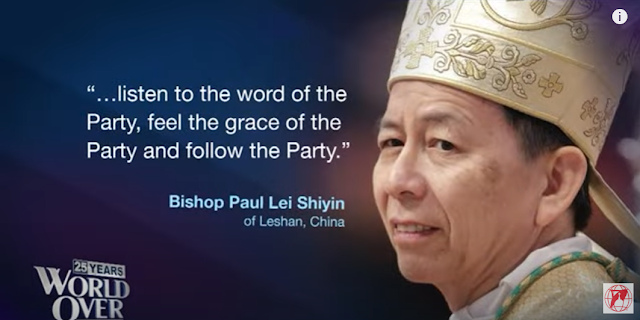 How can the Pope say that his China deal is going well? The deal continues to be wrapped in secrecy, a sure sign that something is going on that they don't want us to know about. The Pillar reports that inside the Vatican Secretary of State the opinion is that this deal is an unmitigated disaster:

One senior diplomatic official told The Pillar that within the Secretariat of State it was generally acknowledged that the Vatican-China deal was a “failure,” but one they were committed to because of Francis’ personal support for the project.

“The deal has not delivered,” the official said on condition of anonymity, because he was not authorized to discuss the Vatican's deal. But, while he said senior officials at the Secretariat of State “would not sign it again if they could do it over,” Pope Francis remained committed to the process of dialogue and “wishing it never happened is not the same as walking away from the situation now.”

Of course the one person Pope Francis should be talking to is the one person he has pretty much formerly ostracised. In September of 2020, shortly before the Vatican-China deal was formally renewed, Cardinal Joseph Zen warned in an interview that the Church’s engagement with the Communist government was costing it moral credibility with the Chinese people, both Catholics and non Catholics.
The Pope's focus is on his political commentary but the Vatican - China deal has been mismanaged on an epic scale. The Vatican betrays the flock and the shepherds.
Next up - Archbishop Vincenzo Paglia, president of the Pontifical Academy for Life and the bishop who commissioned a homoerotic mural for his cathedral Church in Terni-Narni-Amelia, depicts homoerotic themes, trangender persons, prostitutes, drug dealers and other material highly inappropriate for a church setting, grants an interview to Vatican Media to explain the goals of the document entitled "Theological Ethics of Life. Scripture, tradition, practical challenges" arriving in bookstores on 1 July (bound to be a best seller, this one!).
The product of a Pontifical Academy for Life seminar, it endorses artificial contraception as well as IVF. Literally false teaching, see Humanae vitae from Pope Paul VI. It is a disgrace as Fr Murray points out. Paglia's explanation of the book is utter gobbledygook - the obvious Jesuitical sophistry which makes no sense and is the kind of rubbish we have become accustomed to from this papacy (there are quotes in the video below). Fifty-four years after Humane vitae definitively taught on these issues, we have to acknowledge that any talk of "dialogue" around this is only designed to diminish it.

It appears that the brakes are now off the runaway train of the Francis papacy. Every decision, every comment seems to seek to further dismantle the certainties of the faith: the sacramental system, the teachings of the Church, our moral code.

All the dialogue is in one direction - the direction is away from Jesus and towards the world.

The Pope arbitrarily uses doctrine to bolster draconian decisions: take his references to Sacrosanctum concilium to justify his crack down on the Traditional Latin Mass for an example. He utterly ignores it when he wants to act against Church teaching, instead invoking the Holy Spirit as if God seeks to overturn 2,000 years of work to reverse the direction of travel completely.

If everything you do is a disaster, if none of it works out, would you start wondering if you maybe are listening to the wrong spirit?

His slipperiness is part of the warning signs. The way he says he condemns abortion but not the actions people who promote it. Instead, giving them a free pass to act as the will and calling this approach "pastoral" when in fact, it would seem to be the opposite, like a father who's child wants to play on the motorway loudly stating to fellow adults that he disagrees with it in principle, while happily ushering his child over the embankment to play with the speeding vehicles.

We also see this with the August consistory and the rumours about retirement. He knows what he is doing. He enjoys causing controversy, stirring the pot and turning on a dime to act in a way contrary to all the signals he has given off.

All the talk of dialogue and fraternity is utterly meaningless when weighed against this man's actions.

This episode is a must watch - it articulates much more clearly than I can, the damage being done to Christ's Church by this man.

Despite all this I am not down about the Catholic faith - I am alive with it. I know my Lord and Saviour and I rejoice in that relationship. My prayer life grows, I feel more grateful and joyful than I think I ever have. I am so thankful for my Parish and for the beautiful liturgy I can attend there.
I am going to the Latin Mass tomorrow in Rochester Cathedral. there will be a Traditional Latin Mass (Missa Cantata) in the crypt chapel of St Ithamar, for the joint feast of St John Fisher and St Thomas More in the traditional liturgical calendar.

St John Fisher was the bishop of Rochester for 31 years. Both saints died as martyrs under Henry VIII.

The Mass will be offered by Fr Thomas Lynch, parish priest of Strood. Refreshments and networking after Mass.
Rochester Cathedral was built in 604 AD.

I am also engaged in a new weekly bible study group which I am really enjoying. The group is comprised of fairly recently converted Christians and it is a great blessing to see how Jesus is moving and working in the world, irrespective of what Pope Francis does!
So let's be aware of what a disaster he is, let's not be meek about it, but let's be encouraged to cleave ever closer to Jesus, to learn our faith, to engage with it and with others and to spread the joy and love of the Gospel all around us!
God bless you all and have a great weekend!
EWTN Raymond Arroyo Rochester Cathedral The Papal Posse The Traditional Latin Mass