A Synod Designed to Push Lies

On Instagram, thebasiccatholic has shared some very interesting information. 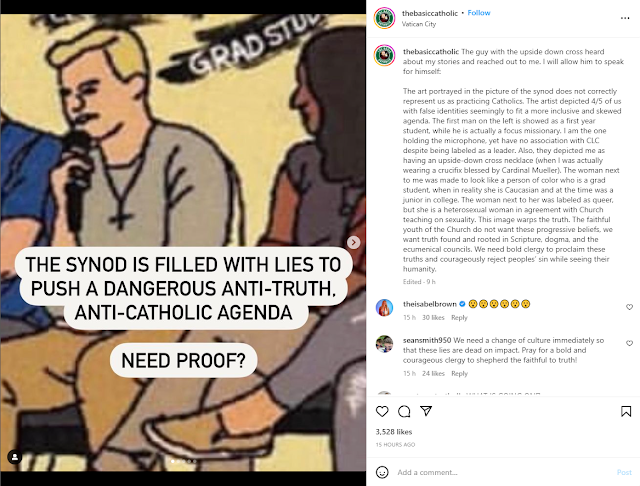 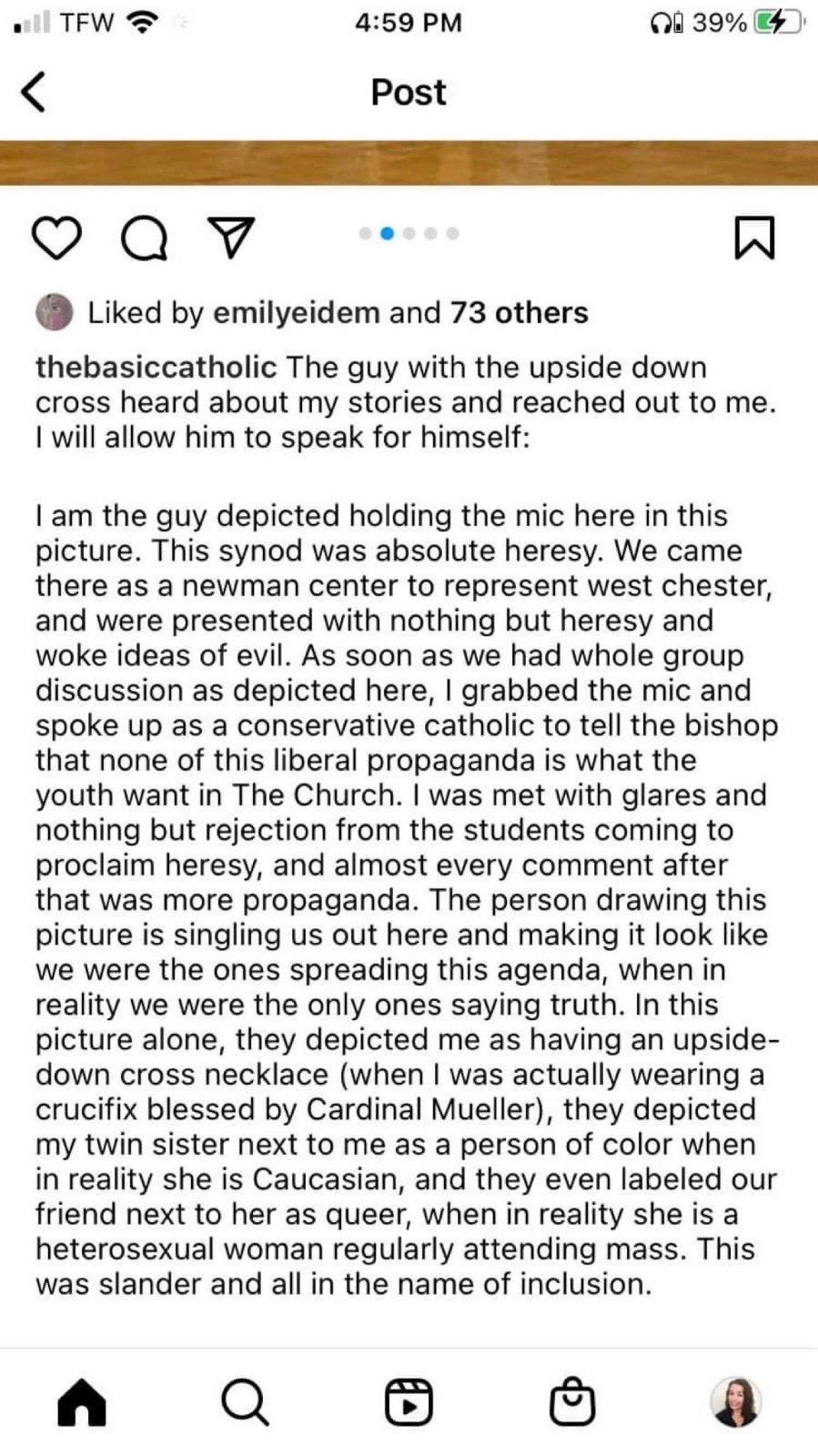 So what we have here is an eye witness account of the reality of the Synod on Synodality.
All the discussion from faithful Catholics leading up to this synod has been puzzling over why, given the clear and documented lack of faith and formation among the general Catholic population (just of of many recent examples here), Rome would seek to consult lay people and even non-Catholics (see no. 6 here) about the direction the Church should take.

Revitalise it how? By walking away from Church teachings? We have seen that modelled in numerous Protestant denominations and we know the result is irrelevance and oblivion. It is widely recognised that the majority of baptised Catholics are not practising, and, of those that are practising, only a small minority are able to articulate their faith with any clarity. Given this reality, it seems a forgone conclusion what any survey will reveal: the lack of belief in Church teaching on sexual issues, divorce, etc etc.
We were assured that this was not the case - although it was not clear what, then, the purpose of such a time consuming endeavor could possibly be.
Now the official Synod media team have posted a series of pictures to help us understand: 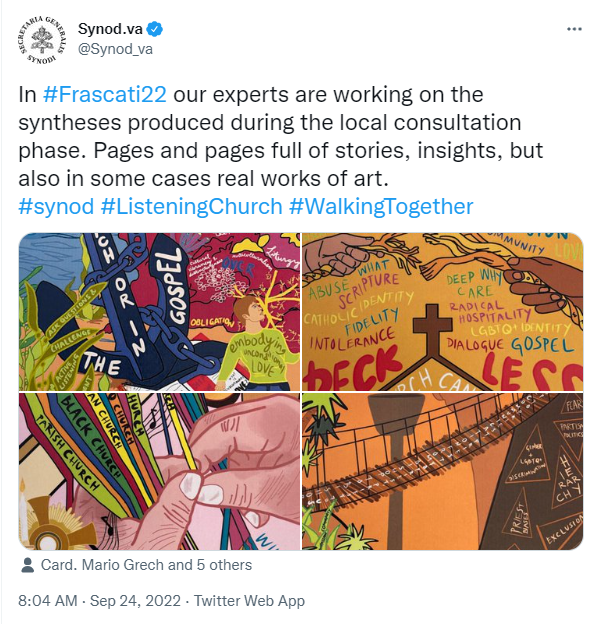 I've posted the above screenshot rather than embedding the Tweet because surely, someone has to delete this rubbish at some point?
The images all promote LGBTQI+ pride - an anthropology completely at odds with Catholic teaching. One image is of a woman dressed as a priest and one image portrays a rope snapping over a church building which clearly puts "liturgy", "scripture", "Catholic identity" and "fidelity" on the "reck" [sic] side: 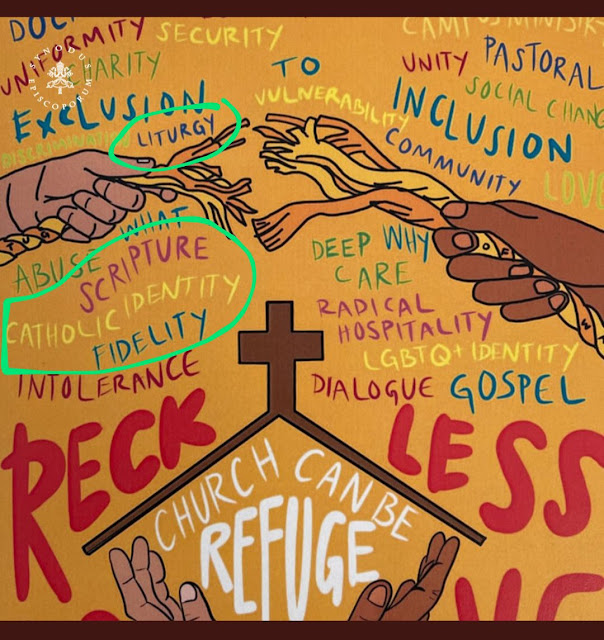 Accountability? You must be kidding. Bishop Zanchetta gets caught abusing seminarians and fiddling the books, so Francis gives him a job overseeing Vatican finances. pic.twitter.com/ZGhumCuTmh

It reflects particularly badly on those who like to be thought of as orthodox. https://t.co/GJ1YMMbp7K

The error in all of this is that although Revelation is indeed historically grounded and does involve a slow pedagogical unfolding of God’s gradual self-Revelation, the terminal point of that Revelation is not modern Liberalism, but the rather more shocking particularity of the Absolute Singularity of a first century Galilean Jew. And this means as well that the Church is not a generator of truth via the path of a curated reconnoitering of Liberalism’s thought-hoard, but a gradual coming to grips with the full depth of that Galilean Jew’s life as the very embodiment of God himself and the very self-exegesis of God’s logic as an infinite, internal processio in a unity of persons. Which is why there is in all modern liberal Catholic theologies a not-so-latent anti-Judaic Marcionism that plays in the sand box of a vulgarized Law/Gospel dialectic. Because in order to justify a Catholic iteration of modernity’s scorched-earth destruction of all pre-modern traditions (which are viewed as primitive stages of maturation) one has to disengage the Christ-image from its Judaic context and present it in Docetic terms as a mere avatar of God “for those iron-age, ignorant Jews” but which can now be redeployed holographically as an avatar/icon of libertine liberation from all sexual and gender restrictions. We are therefore presented with a clear choice for or against the absolute theological normativity and priority of the historically concrete Christ over and against the malleable and fungible Docetic Christ of a thousand faces.
This sense of history’s inevitable progression into modernity as the final phase of some ill-defined maturation process is not believed any longer by most modern secular intellectuals. Most of them have long since moved on from such high-minded and hortatory Enlightenment moralizing which is viewed by most now as still far too classical in its understanding of existence. They have moved instead into a cynical and merely stipulative Liberalism having no grounding in anything except our functional desire to create the social conditions necessary in order to maximize the digital transformation of our world into a techno-paradise of manufactured reality tailored to the whims of the untethered self. There is a nihilistic weariness with reason and metaphysical thought as such viewed now as just so-many epiphenomenal brain ejaculations having no purchase on reality. We are now content to rest in the shallow end of the pool which is the safe zone of techno-manipulation. It is the quiet totalitarianism of an “opposable thumb” anthropology that sees humanity’s most distinctive and defining trait as our ability to grab hold of things in order to acquire them and bend them to our immediate material needs.
But the Catholic theological guild of the post-conciliar era was too stupid to see that this is the eventual outcome of Liberalism. As a cannibalistic and parasitical entity from its birth it could only eventuate in its own nihilistic self-immolation. And when I say that these Catholic thinkers were stupid I mean “stupid” as in stupid. They were intellectually deficient and obtuse on a global scale. Just educated enough to sound like Heidegger, Kant, and Hegel, but not nearly smart enough to understand them, they proceeded to redefine Catholicism in a manner that can only be described as a different religion altogether, but still using the same symbols and terms, and through it all too ignorant to understand that this is what they were doing. Yes, yes, some of it was deliberate and calculated. But I lived through this period. I knew these people. And most of them were well-meaning, but stupid, rather than Catholic versions of Dr. Evil in his underground volcanic lair plotting the destruction of the world. They simply had grown tired of the effort required to maintain the cognitive dissonance between Tridentine Catholicism and modernity in some kind of tolerable psychological modus vivendi, and had thrown in the towel and joined the modern world as Stockholm syndrome participants.
They were thus a set of conclusions in search of an argument and it did not matter if the arguments were genuinely coherent or even remotely Catholic.
These revisionist Catholic genital Gnostics continued to use words like “Revelation” but invested them with subtle new meanings. Rahner’s epigones in the chronically mediocre clerical world of the chanceries and seminaries appealed to “anonymous Christianity” and “the transcendental structure of unthematized spiritual experience” as the new privileged location for discerning God’s Revelation -- a “Revelation” that could now only be teased out and understood by the Germans apparently. The Germans were fond of making sweeping generalizations about “modern man” along the lines of what it is that “modern man” can “no longer accept or believe”. In reality, all they were describing was the bourgeois Angst of highbrow culture in places like Cologne and Munich and confusing that with every culture on the planet. Which is a move you can make only if you are assuming that your own culture is somehow paradigmatic in a “cutting-edge” and normative kind of way for all others.
It would seem that still to this day there are those in Germany who continue to eat the Schnitzel of Teutonic exceptionalism and to then confuse that spirit with the Holy Spirit. And once again, what is old is new again, and as it was in 1975 so it is again in 2022. Like that ugly paisley fat neck tie that has hung in your closet for decades without use but which is now in vogue again, the Germans have paused from their secular preoccupations long enough to put that Church tax to good use and to rouse the 2% of Catholics who still attend Mass there to denounce that Church in the name of the Church in the hopes of getting people back to Church.