What Happens When the Police Lose Moral Reasoning?

Caroline Farrow is a friend of mine. We usually have a few pints together after March4Life. She is U.K. & Ireland Campaign Director at CitizenGO.

She was recently arrested and taken to a cell in a police station because for a Twitter spat and offensive memes on the internet posted by a third party. Caroline did not post them but, even if she had posted them, posting offensive cartoons shouldn’t be illegal and certainly shouldn't warrant arrest!

This is an interview about the incident she has given to GB News:

Rod Liddle has also written up the incident in The Sun.
He explains:
"What you have done is refuse to concede that a man who transitions into a woman IS a woman.

As a consequence the Old Bill are on your case.

They are on the side of the trans activists who have been harassing you.

You are not allowed to say stuff like that, even if it is palpably true.

The Government just announced that in future every burglary will be investigated by police.

It is incredible they should have to make this pledge.

But the police have changed in recent years. Burglaries — and car crime and street crime and assault — come a very long way down the list of stuff they care about.

They are far more interested in arresting middle-aged women for non-existent hate crimes.

They enjoy nothing more than policing the internet looking for someone who might have said something a bit naughty.

That’s because arresting Caroline Farrow is a lot easier than apprehending some scrote who has just mugged someone in the street.

Plus, policing non-existent hate crimes gets the coppers brownie points with the Left.

It’s another thing to add to their recent repertoire, which has involved going down on one knee, painting their patrol cars in rainbow colours and standing on and watching while statues get thrown into a river.
Welcome to the Woke Police — not coming to investigate a real crime near you any time soon.

Fewer than four per cent of victims of theft get to see their attacker charged. The figure for burglaries is seven per cent.
The police have become diverted from fighting real crime and spend too much time both virtue-signalling and persecuting people who have simply expressed themselves."
The Police have lost their moral authority employing diversity & inclusion managers on exorbitant salaries to come up with schemes which do nothing but divert from the true important issues of right and wrong and focus instead on "feelings". What rubbish. 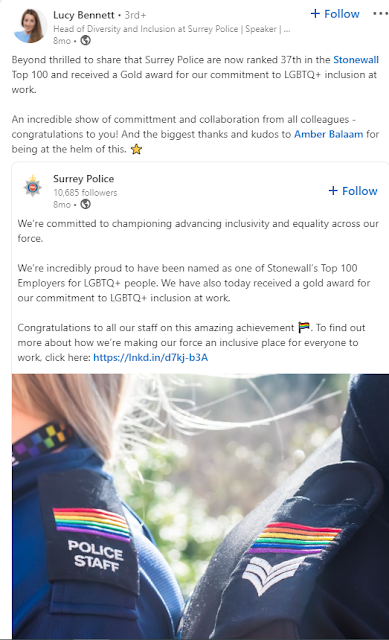 Can we be surprised to find the police are confused about priorities? As our Christian foundations continue to be eroded, can we really be shocked that burglary doesn't even warrant a visit from a police officer these days but potentially being mean on the internet does?
Can you seriously tell me that the average bobby thinks that a man can transition into a woman via medical procedure?
How long are we going to allow this poison to infect our society?
If you can help Caroline fight this injustice - let's face it, she is doing it on all our behalf's - you can donate to her legal fund HERE
Carolline Farrow Rod Liddle Transgenderism