When the Vatican's Sells Moral Relativism to us as Pragmatism. 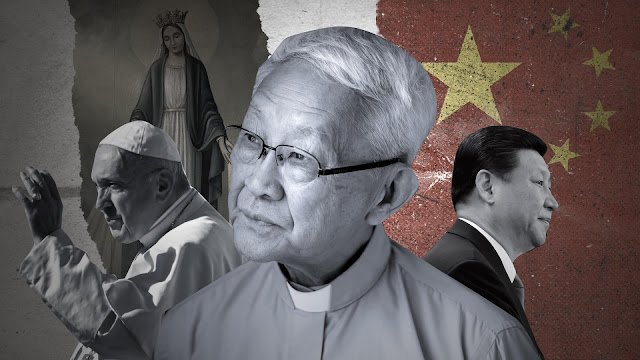 There is a lot of stuff I want to blog about. Sometimes it feels a bit overwhelming - there is such a pace to happenings in the Church under Pope Francis and I do feel I want to document it and record what was going on and the contemporary discussions that surround each event.

I've meaning meaning to write something about China and the Vatican's involvement.

It is hard to see how there could be any justification for the secret agreement between Rome & Beijing, the results of which are the silence of the Vatican on Chinese civil rights violations, the persecution of faithful Catholics & the imposition of a syncretic form of Catholicism which advocates worship of "the Party".

I don't know about you, but I'm starting to see a pattern here.

Amoris Laetitia could be said to be an argument for Fundamental Option. Pope Francis has praised Bernard Haring. The Pope's approach to Islam and defence of Mazzucato seem clearly Utilitarian. Is he trying to reintroduce the pre-conciliar moral relativism already dealt with in Veritatis Splendor

With regards to China: Some say it is about money. Guo Wengei, exiled Chinese dissident, has claimed that the Chinese Communist Party (CCP) assigns $2 billion every year to pay off the Vatican for its silence concerning atrocities by Beijing.
Other rumours suggest, perhaps following the scandal at the North American College last year, that the Vatican's supportive attitude towards the Chinese regime is to do with Chinese access to Grindr data. I have heard the Grindr rumour before but I don't think it stands up to scrutiny as Kunlun Tech sold the platform to San Vicente Acquisition in 2020. Despite this James Lu, a former Baidu Inc executive was part of the consortium that bought Grindr and is now Grindr’s chairman so there could still be a possibility that Beijing is involved, although this seems quite remote.
The Pillar recently posted an analysis piece which asked whether the deal was making progress or, in fact going backwards? This followed The Holy See's announcement of an extension to the Vatican-China deal, praising the "small achievements" it has made.
Cardinal Pietro Parolin, the Vatican Secretary of State, argues that the deal is “essential to the daily life of the Church” in China — repeating a frequent theme in his defence of the bilateral agreement. Basically, his argument is that the deal is a pragmatic necessity.
Perhaps the concerns about this deal become more apparent on the plane home from Khazakstan, where he devoted more than 200 words to the Rome-Beijing dialogue, the Chinese mentality, and the notion that the Chinese regime is not democratic. Notice that this question had not been raised by the reporter; the Pontiff brought it up himself:

"Qualifying China as undemocratic, I do not identify with that, because it’s such a complex country ... yes, it is true that there are things that seem undemocratic to us, that is true."

As is normal for this Pontiff, we must make do with “impressions,” rather than clear statements, much less denunciations. He does not want to say that China in undemocratic. He does allow, however, that some of Beijing’s actions might seem undemocratic to our unsophisticated Western understanding.
Why is Pope Francis so slow to criticise the Chinese regime?

The Pillar piece notes many of the inconsistencies and concerns:
This article was subsequently attacked by Mike Lewis at Where Peter Is - a site set up to defend Pope Francis in all his confusing ambiguity. When we are all baffled, WPI always knows what's really going on! Phew! Oh - and if you don't agree with him, you're not a Catholic.
The style Lewis employs always seems to be incredulity that anyone could be so stupid as to take issue with Pope Francis who is clearly the greatest Pontiff in history. He attacks The Pillar, which is highly respected, as part of the "biased and ill-informed negative coverage" describing the article as "a particularly egregious example of the distorted way the circumstances and purpose of the agreement are presented."
I think one of the best expositions of how naïvely this bellicose response is written comes from Dr. Jules Gomez at Church Militant. Gomez piece is inspired by the last Governor of Hong Kong, Lord Patten of Barnes, himself a practising Catholic.
"There are at least two Catholic bishops who are in prison. There are arguably others who are under house arrest. There are lots of priests who've been driven out of the priesthood because they won't sign a vow of loyalty to the Communist Party — and now working as farmers or working in factories," the British peer lamented.

Patten slammed the Vatican for being "incredibly quiet or discreet" over the persecution of "other Christian churches in China," as well as Muslims who face incarceration, forced sterilization and forced abortions, which have been denounced by the United Nations.

"If they can be denounced by the U.N., why aren't they denounced by the Catholic Church?" he asked. "When things are wicked, when things which are done are wicked, we should call them out as wicked."
Soes Mike Lewis know more about China than the former Governor of Hong Kong? Seems unlikely!
Another British Catholic Pier is highly critical of the Vatican - Beijing deal:

Nina Shea on Vatican-CCP deal & how approved “bishops”lead clergy to re-education courses to “conform to socialist society” & to“listen to the word of the Party, feel the grace of the Party, & follow the Party.” Everything Cardinal Zen said would happen. https://t.co/4usNAlzLRU

Papal bull: the shame of the Vatican’s dealings with the CCP | Damian Thompson in The Spectator. https://t.co/z7ITYT5RnL

Lord Alton is a deeply faithful Catholic and someone who has devoted his life to defending human rights.

Even if all those calling out the hypocrisy of the Vatican - CCP deal are wrong and there is some secret magic thing going on, the damage being done to the Vatican's political capital here is breath-taking.

More importantly, if Mike Lewis and WPI thesis is correct, it does nothing to absolve Pope Francis and the Vatican from a serious breach of Catholic moral principles. Rather it condemns the Vatican, providing incontrovertable evidence of the Utilitarianism and moral relativism we increasingly see evidenced throughout the papacy of Pope Francis.